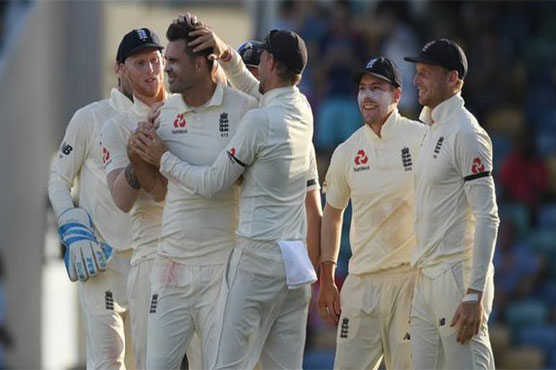 BARBADOS (Agencies) – England had the better of the opening day of this series by limiting West Indies to 264 for eight wickets. James Anderson, who had bowled too short earlier, made full amends by taking three wickets in his second new-ball spell.

In the process he took his total tally to 569 Test wickets and became the first England bowler to take 200 wickets overseas.

Anderson had taken only one wicket in Sri Lanka before being omitted for the final Test. He had only one day of bowling during the tourists’ week of match-practice. But the engine needs nothing more than fine-tuning, even if it is 36 years old, and he reeled off 24 overs – half of them maidens – to take his four wickets for only 33 runs.

Once he pitched the ball up, which he did not do in his opening spell, Anderson was as penetrative as he has ever been. West Indies were well in the game when England took the second new ball, although none of their batsmen had played the big innings required, and Anderson needed no second invitation.

Given the bonus of an inaugural Test against Ireland in July, he is well on course to reach his 600th Test wicket during the Ashes.

Ben Stokes weighed in with three wickets, two of them in the middle part of the day when West Indies threatened to put together the telling partnership that never came. If England had picked a fourth pace bowler in Stuart Broad, whose confidence had been restored by a hat-trick last week, it is inonceivable that West Indies would have lasted the first day. So England got there in the end but they went the long way round, by selecting two spinners, instead of taking the short cut.

England’s selection was far from thoughtless but rather came at the opposite extreme of being too clever. Root and Trevor Bayliss, who together made the final decision, probably looked too far down the track to what might happen later in the game when the pitch starts turning. Round one matters more – to win the opening session of a series by knocking the opponent down.

More weight should have been given to the following facts: that the pitch was going to start damp, having been watered within 48 hours of the start; that the ball was of the Dukes brand, effectively designed to assist pace bowlers in the West Indies; that there was a strong cross-wind, helping Anderson’s outswinger (though he switched to the pavilion end to take his first wicket of Shai Hope), a wind which would have helped Broad’s outswinger too; and that West Indies have just returned from a long tour of India and Bangladesh, where they faced better spinners than England’s.