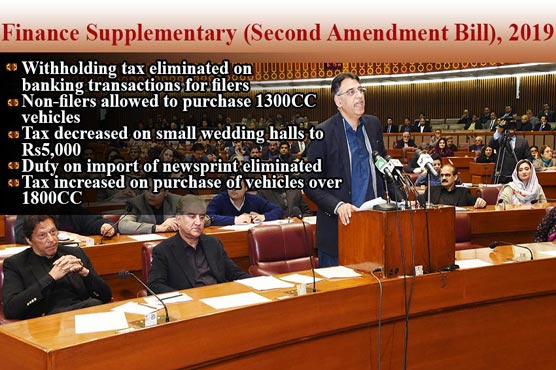 The Finance Minister announced to reduce the tax for the small and medium enterprises sector from 39 percent to twenty percent to encourage business activity by low income investors especially the youth.

Asad Umar also announced to reduce income tax on housing schemes for low income people from 39 percent to 20 percent to encourage housing sector under Prime Minister’s project for construction of five million Houses for the middle and lower middle classes of the society.

He said a revolving fund with an amount of five billion rupees will be provided as interest free loans for the construction of small houses.

Touching upon the taxation sector, the Finance Minister propose to abolish withholding tax on banking deposits and transactions for the filers.

He said non-filers would now be allowed to purchase automobiles upto 1300cc. However, their tax rate will be enhanced to generate more revenue and encourage the people to become filers.

The Minister said taxes on cars with engine capacity of 1800CC and above will be increased.He said Gas Infrastructure Development Cess will be removed from fertiliser production.

To promote ease of doing business, Asad Umar declared that the business community will now be required to file their statements about withholding tax only twice in a year from the previous practice of filling twelve statements in a year.He said tax on marriage halls of 500 square feet in Islamabad will be reduced from 20,000 to 5,000 rupees.

The Finance Minister said a transparent and simplified tax payment scheme is being introduced on the long standing demand of traders.

He said this scheme will initially be launched in the Federal Capital and then replicated in the entire country.

He said the present government believes in free media and wants to make it a profitable industry.

He announced duty on the import of media industry related material and equipment is being abolished altogether.

Asad Umar said the growth of manufacturing sector has witnessed a sharp decline over the last ten years as a result of flawed policies of previous governments. He said despite financial constraints, we are reducing duties on import of raw materials used in the industrial sector.

In some cases these duties are completely being abolished to uplift this important sector of economy.

He said super tax is totally being abolished for non-banking companies from 1st July whilst corporate tax will be reduced by one percent every year. He said that ratio of savings has reduced to ten percent and we are proposing abolishment of tax on the savings scheme.

The Finance Minister also announced a number of measures to motivate investment in the stock exchange. These included abolishment of zero point two percent withholding tax on trading of shares.

Asad Umar said that the tax refunds have soared to two hundred billion rupees and the government is introducing a scheme in consultations with the business community to address the issue. He said we are bringing a promissory note to address the liquidity issue of the entrepreneurs.

He said we are contemplating a legislation with the cooperation of the opposition on Gas Infrastructure Development Cess. He said the passage of the bill will help reduce the prices of Urea by two hundred rupees per bag. He said there is also a production index on the loans of farmers. He said this production index is being reduced from six thousand units to four thousand units. He said regulatory duty on the component of diesel engine is being reduced from 17 to five percent.

The Finance Minister that a Medium Term Economic Frame Work will be announced next week. He said we will also welcome suggestions from opposition on the matter.

Earlier, the Finance Minister gave an overview of the economic situation of the country. Criticizing the performance of previous governments, he said the PTI government inherited a gloomy economy with severe budget and current account deficits. He said the deficit of power sector rose to 450 billion rupees and that of gas sector 150 billion rupees.

He said Steel Mills, Pakistan International Airlines also witnessed a record deficit while the losses of Pakistan Railway stood at 30 billion rupees. He said the previous government left behind the debt of 2500 to 3000 billion rupees, committing what he said an economic terrorism with the country.

He said we took difficult decisions to turn around the economy. He said the economy is now reviving as a result of governments’ corrective measures. He said that exports are witnessing a boost while imports are on the decline. He said the current account and trade deficits have substantially been reduced. He, however, said that we have to strike a balance in revenue and expenditures.

Responding to points of Opposition Leader Shahbaz Sharif on the Sahiwal incident, Foreign Minister Shah Mahmood Qureshi said that a transparent inquiry was conducted into the tragic Sahiwal incident through a joint investigation team.

He said prompt action has been taken against the concerned police officers by removing and suspending them from their positions.
Foreign Minister said an FIR has also been registered against the officers involved in the encounter and their case will be taken up by an anti-terrorism court.

He said unlike the previous governments we did not protect the officers who abused the power.