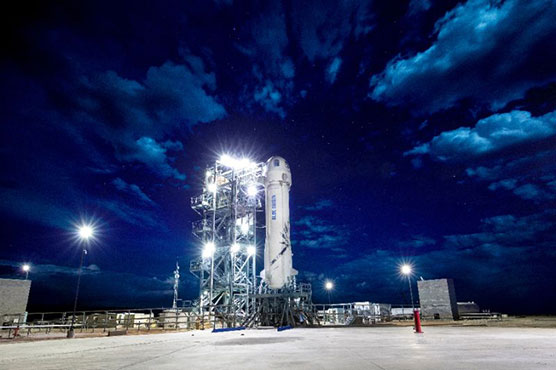 Washington (AFP) – With an eye to launching the first tourists to space by year s end, Blue Origin, the rocket company owned by Amazon CEO Jeff Bezos, blasted off the 10th test flight of its New Shepard rocket on Wednesday.

The rocket, carrying no people on board but eight science experiments for NASA, soared skyward from a launchpad in west Texas at 1508 GMT against a clear blue sky.

A few minutes into the flight, the capsule separated as planned from the booster and reached its peak height of 66 miles (106 kilometers).

“That is exactly what we were targeting,” said Ariane Cornell, an astronaut for Blue Origin and commentator on the company s live webcast of the launch.

The frontier of space is internationally agreed to be 62 miles (100 kilometers) above Earth, known as the Karman Line.

Eight minutes after blast off, the rocket booster fired its engines and made a controlled, upright landing back on Earth, marking the fourth flight for this particular rocket, and the 10th flight test for New Shepard overall.

“That, everybody, is a reusable rocket,” said Cornell.

Moments later, the capsule floated to Earth, aided by a trio of parachutes, and touched down in a cloud of dust.

“Looks to have been a wholly successful flight today,” wrote Blue Origin on Twitter.

More test flights lie ahead, but the first flights with passengers on board could start by late 2019.

“We are aiming for the end of this year,” Cornell said.

“We are not in a rush. We want to take our time and do this right.”

The price per ticket has not yet been announced.

Virgin Galactic, headed by British billionaire Richard Branson, is also working on a vessel of its own to carry tourists to space.

On December 13, 2018, Virgin Galactic s SpaceShipTwo, VSS Unity, flew higher than it ever had before, surpassing what the US Air Force considers the boundary of space (50 miles), and marking the first manned flight to space from US soil since 2011.

The brief flight — with two pilots on board — was a key milestone for the Virgin Galactic, which is striving to send tourists to space at a cost of $250,000 per seat.