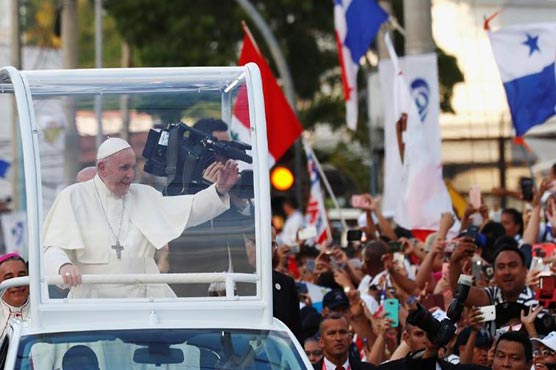 Panama City (AFP) – Pope Francis flew into Panama on Wednesday at the start of a five-day visit for World Youth Day festivities amid heightened tensions over an unfolding political crisis in nearby Venezuela.

More than 1,000 pilgrims cheered Francis’ arrival at Tocumen airport, waving the starred red, white and blue Panamanian flag and the yellow and white flag of the Vatican.

The 82-year-old pontiff acknowledged them with a wave and a smile after slowly descending the steps of his Alitalia plane following a 13-hour flight from Rome.

Tens of thousands cheered and waved as the pope then made his way on the 30-kilometer (19 mile) drive to the Papal Nunciature in Panama City, his small car dwarfed by giant SUV’s in the motorcade.

The car had to swerve sharply at one point when a young man broke through a barrier and ran towards it, waving a Venezuelan flag. The man was quickly seized by security guards.

In crisis-wracked Venezuela, opposition lawmaker Juan Guaido had earlier proclaimed himself president with the support of the United States and several other countries, setting up a tense standoff with the government of President Nicolas Maduro.

Francis switched to his Popemobile for the last few kilometers of the trip, waving to a cheering crowd. Some held up portraits of the Virgin Mary, while one man held up a banner saying: “Pray for Venezuela.”

Francis is expected to speak out strongly in defense of Central American migrants during the World Youth Day festivities, for which around 200,000 young Catholics have gathering in Panama.

Aboard his plane as he left Rome, he told reporters in response to questions that fear of migration was “making us crazy” and he slammed US President Donald Trump’s plans to build a wall at the Mexico border as “madness.”

The festive five-day meeting offers the 82-year-old pontiff a brief respite from a torrent of Church sex scandals that have jolted his papacy.

At a mass to open the festivities on Tuesday evening, tens of thousands of young pilgrims stood to chant: “We are the pope’s young people.”

Panama’s archbishop, Cardinal Jose Domingo Ulloa, told them the future of the church lay “in your vision of a better world.”

Before his departure, Francis also announced he would fulfill a long-held desire to visit Japan in November.

The government of the Central American country has given public service employees the rest of the week off to relieve traffic congestion in the Pacific coastal city.

Groups of young pilgrims have been flocking into the small Central American country for days.

Wrapped in the flags of their nations, many resemble soccer fans on the eve of a major tournament, except this is one event in which they will be shouting for the same side.

“He speaks to us youth in a very simple way, and he challenges us to be better Christians, better Catholics and better citizens in our respective countries,” said James Murphy, 23, from the Pacific island state of Tonga.

Tens of thousands of young pilgrims attended the colorful open air mass, held against the backdrop of palm trees and the capital’s historic ramparts overlooking the Pacific end of the Panama Canal.

Caravans of Central American migrants have traveled north through Mexico to the US border since October, stirring a debate over illegal immigrants and Trump’s plans to build a border wall, which Francis previously criticized during a trip to Mexico.

He used the 2016 World Youth Day event in Poland to call on conservative governments in Central and Eastern Europe to soften their resistance to migrants seeking refuge from conflict in the Middle East.

“Many of the young people who are participating in the WYD are immigrants themselves,” Vatican spokesman Alessandro Gisotti said, adding that Francis could be expected to speak out on the issue.

Irving Valiente, a pilgrim from El Salvador, said the meeting with the pope would be “an injection of faith” for people from migrant countries.

“We already have it, but we have to increase it, so that it can move mountains, so that the situation in our country can change in a positive way. We should not lose hope. With God everything is possible.”

The Vatican bills World Youth Day as a chance for the pope to reach out to young Catholics who he says “can change the world.”

It is the sort of colorful event the people-friendly Argentine pope revels in — a world away from the strains of sex abuse scandals that have rocked his six-year papacy.

The most recent scandals struck in the United States, where priests and bishops in several dioceses are under investigation for decades of abuse of minors.

Francis will hold two open-air masses in Panama City. Among the other highlights of his five-day visit will be a trip to the Good Samaritan home for young HIV and AIDS patients on Saturday, after the closing mass.

He will also take a short helicopter trip outside the city to Pacora to visit a youth detention center and hear the confessions of inmates, including one serving time for murder.

Pompeo confirms he’s been approached to run for Senate