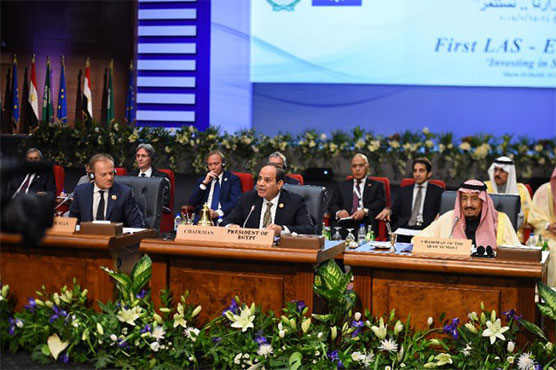 SHARM EL SHEIKH (AFP) – European and Arab leaders on Monday ended their first summit pledging to launch a “new era” of cooperation on topics ranging from counter-terrorism to migration despite sharp differences over human rights.

Around 40 EU and Arab leaders stressed at their two-day summit in the Egyptian Red Sea resort of Sharm el-Sheikh how their challenges were interlinked and required joint efforts to meet them.
In a final statement, the leaders pledged to “embark on a new era of cooperation and coordination” that would boost stability and prosperity in both regions and beyond, all within a rules-based international order.

Egyptian President Abdel Fattah al-Sisi, the summit host, highlighted common interests on counter-terrorism, migration, economic development and efforts for peace in Yemen, Syria, Libya as well as between Israel and the Palestinians.

But Sisi shot back at a European journalist who asked him to respond to EU criticism of human rights in Egypt.

“You are not going to teach us about our humanity, our values, and our morality,” Sisi said during the closing news conference. “Respect our humanity and our morality as we respect yours.”
The Egyptian leader said “our priorities are different” as people of the region faced hundreds if not thousands of terrorist acts, compared with Europe which had only a few.

Jean-Claude Juncker, head of the European Commission, the EU s executive arm, told the same news conference that differences on “respect for human rights should not prevent us from envisaging the future with optimism.”

There were also differences on how to deal with Iran, with the Sunni-led Arab countries taking a harder line toward the government in Shiite-dominated Tehran.

A Western diplomat told AFP several Arab countries wanted a firmer position on Iran in the final summit statement, which the Europeans refused to do.
Luxembourg Prime Minister Xavier Bettel earlier cautioned against expecting too much from the first EU-Arab League summit.

“If you think that by seeing each other for 24 hours in Sharm el-Sheikh and it s peace in the world and in the region, then you believe in Father Christmas,” Bettel told reporters.

But Bettel said the summit helped lay the ground for future talks and led to important personal contacts.

Both sides agreed the need to work together to manage migrant and refugee flows as well as fight extremists, though Europe is itself divided on migration.

More than one million people, most of them fleeing the war in Syria, entered the bloc in 2015. Eastern EU governments have refused to admit asylum seekers landing in front line states like Italy and Greece.

Conflict-wracked Libya meanwhile is used as a staging area by smugglers and traffickers to take economic migrants and asylum seekers to Italian shores.

European leaders have also stressed the need to defuse conflicts in the region because they are linked to extremists implicated in a wave of terrorist attacks in Europe.

Arabs and Europeans have both been battling the Islamic State group, and its followers. The group has territorially been pushed out of its strongholds in Iraq and Syria.

The summit in the southern Sinai desert was heavily guarded by Egyptian security forces who are fighting a bloody jihadist insurgency a short distance to the north.

Most of the leaders of the 22-member Arab League attended, except for Syria s President Bashar al-Assad, whose country was suspended from the League over the civil war, and Sudan s Omar al-Bashir, who is grappling with protests at home.

Absent on the EU side were the leaders of France, Spain, Latvia and Lithuania.

European Union countries viewed the summit as a way to protect their traditional diplomatic, economic and security interests while China and Russia move to fill a vacuum left by the United States.

US, Israel back British plans to ban Hezbollah