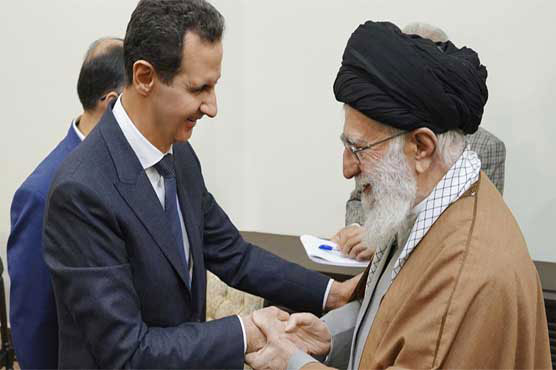 During talks, Assad expressed his gratitude to Iran for all that it has done for Syria during the nearly eight-year war, the Syrian presidency said.
The leaders “reviewed the fraternal and strong relations between their two peoples, which have been the main factor in maintaining Syria and Iran in the face of plots by enemy countries”, the presidency said.

Khamenei told Assad that “Iran considers helping the government and nation of Syria to be helping the resistance movement and is proud of it from the bottom of its heart”, his website said.

“The creation of the buffer that the Americans are seeking to create in Syria is an example of these dangerous conspiracies which must be strongly denounced and resisted,” Khamenei added.

He called Assad “the hero of the Arab world” and said his steadfastness made the “resistance more powerful and respected”.
Iran and Russia have been the key allies supporting Assad as he has battled to maintain his grip over Syria during nearly eight years of fighting that has claimed more than 360,000 lives.

Tehran has repeatedly said it does not send regular troops to fight in Syria, but has only provided military advisers and militia fighters from various countries.

Photographs published on the leader s website showed the commander of the Revolutionary Guards Quds Force, Major General Qassem Soleimani, was present at the meeting with Khamenei.

“The Islamic Republic of Iran as before will be alongside the people and government of Syria,” the Iranian government s official website quoted Rouhani as saying.
With the help from its allies, Assad s regime has retaken swathes of territory from rebels and jihadists since 2015 and now controls around two-thirds of Syria, including its main cities.

During their meeting Rouhani assured Assad that “Tehran will be alongside Damascus in the stabilisation, return of refugees and internal political process”.

Damascus and Tehran signed a string of deals in late January, including a long-term “economic cooperation” agreement.

At the time, Assad said the deals were meant to “help consolidate Syrian and Iranian resilience against the economic war waged against them by some Western states”.

The conflict in Syria has caused nearly $400 billion of destruction, according to the United Nations.

Khamenei s website said the meeting with Assad took place on Monday morning, but gave no information on whether the Syrian leader remained in Iran.

Assad s only other trips outside his homeland since the war began in March 2011 with a brutal crackdown by his forces have been to Russia.