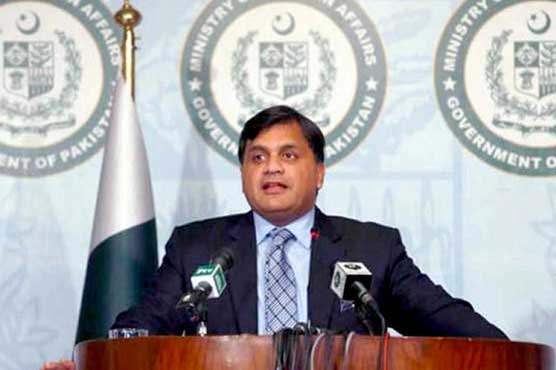 ISLAMABAD (Web Desk) – India and Pakistan will discuss the draft agreement on Kartarpur Corridor this month, the Foreign Office said in a press release on Tuesday.

Details suggest that the two neighbouring countries will held discussion by exchanging visits by their respective delegations.

The Pakistan Delegation will visit New Delhi on March 14, 2019, followed by the return visit of the Indian delegation to Islamabad on March 28, 2019.

It was conveyed to the Acting Indian High Commissioner who was called to the Ministry of Foreign Affairs today by Dr. Mohammad Faisal, Director General South Asia & SAARC.

He was told that Pakistan’s High Commissioner to India will be returning to New Delhi, after completion of consultations in Islamabad.

The development came days after a rare aerial dogfight between India and Pakistan over Azad Kashmir ignited fears of an all-out conflict, with world powers rushing to urge restraint.

Tensions between the arch-rivals have escalated significantly over recent days, after a suicide bombing in Indian Occupied Kashmir killed 40 Indian paramilitaries.

Pakistan has denied any damage or casualties, and independent reporting has shown the strikes hit a heavily forested area with little infrastructure nearby. Residents have said just one person was injured.

The next day Pakistani aircraft shot down at least one Indian aircraft and captured its pilot after it violated the airspace.

The pilot was handed back to India last Friday in what Pakistani Prime Minister Imran Khan called a “peace gesture”.

Took action in national interests and not under anyone’s pressure: DG ISPR