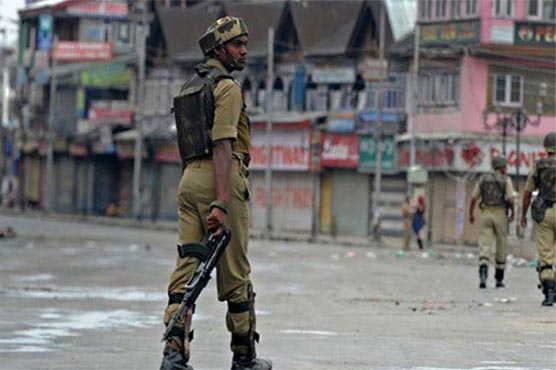 The troops martyred the youth identified as Adfar Fayaz Parray and Irfan Ahmad Rather during a cordon and search operation in Tral area of the district. The troops also blasted a house with explosive material in the area. Adfar and Irfan were residents of Gulshanpora and Shariefabad areas of the town.

Meanwhile, shutdown was observed in the Kashmir valley and in Banihal and other areas of Jammu region against the ban on Jamaat-e-Islami and New Delhi’s attempts to scrap Article 35-A of the Indian Constitution. Call for the strike was jointly given by the Kashmir Economic Alliance, Kashmir Traders and Manufacturers, Federation Chamber of Industries Kashmir and All Transport Welfare Association.

A large number of members of the trade and transport organisations, today, staged a protest demonstration at Lal Chowk in Srinagar against the ban on Jamaat and conspiracies against special status of Jammu and Kashmir. The protesters were holding placards and banners with slogans against the fiddling with Article 35-A

The Supreme Court of India is likely to hear the petitions against Article 35-A of the Indian Constitution tomorrow and on Thursday. The Kashmir High Court Bar Association has reconstituted a team of its members to contest the petitions before the court.

On the other hand, the participants of a protest demonstration in Brussels called upon the European Union to play its role for de-escalation of tension in South Asia through peaceful resolution of the Kashmir dispute. The demonstration was organised by the Kashmir Council Europe outside the head offices of EU Commission and EU External Action Service in Brussels.

A Delhi-based civil society group under the banner of Citizens Against War gathered at Jantar Mantar in New Delhi against the rising tension between Pakistan and India. The demonstrators urged Islamabad and New Delhi to look for peaceful solution of the Kashmir dispute.