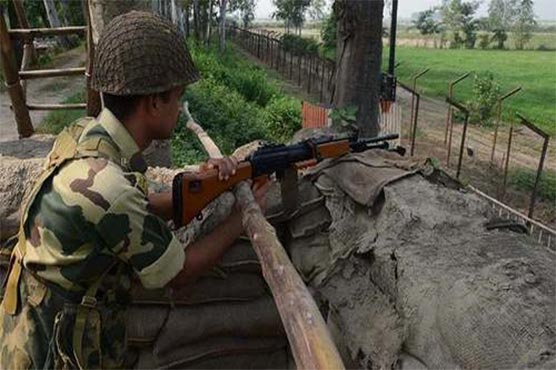 Resultantly, 26-year-old citizen Sharafat who is the son of Abdul Qayyuum and resident of village Dara Sher Khan got injured.

Situation along Line of Control remained relatively calm throughout the day.

“Pakistan Navy’s alert and vigilant presence displayed the capability to deter and safeguard the sea front against any misadventure,” it added.

On Monday, ISPR notified that India continued firing along the Line of Control in five sectors which include Neza Pir, Pandu, Khanjar Munawwar, Patal and Bagsar.

According to the ISPR, the Pakistan Army gave a “befitting response by targeting Indian posts”.

Armed forces of Pakistan continue to be “alert and vigilant”, the military’s media wing said. It added that no life loss has occurred at the Pakistani side during the past 24 hours.

ISPR says that the funeral prayer of Nayak Khurram, martyred from Indian firing in Nakial sector, was offered in Dera Ghazi Khan. He was buried with military honors.

On March 2, two Pakistan army soldiers embraced martyrdom at Nakiyal Sector of Azad Jammu and Kashmir (AJK) as “ruthless shelling” by Indian troops from across the restive Line of Control (LoC) continued, according to the Director General of the Inter-Services Public Relations (ISPR), Maj Gen Asif Ghafoor.

Both the martyred soldiers were 31-years-old and belonged to DG Khan. Abdur Rab and Khurram were married and had two and one daughter respectively.

The same day, two civilians were also killed and one woman sustained critical wounds by unprovoked violations of Indian troops in AJK.

The casualties occurred in Tata Pani and Jandrot sector along the LoC, which was calm since the morning but became “hot” in the afternoon after Indian troops resorted to heavy mortar and artillery shelling.

The violation came a day after Pakistan released Indian Air Force (IAF) pilot Abhinandan Varthaman as “a goodwill gesture” for promotion of peace and stability in the region of South Asia.

Abhinandan’s MiG-21 jet was shot down over Kashmir on Wednesday, after a dogfight in the skies over the disputed Himalayan region which sent tensions between India and Pakistan to their highest levels in years and alarmed world powers, who issued calls for restraint.

The latest confrontation between the neighbours erupted after a suicide bombing in Indian Occupied Kashmir killed over 40 Indian troops on February 14.