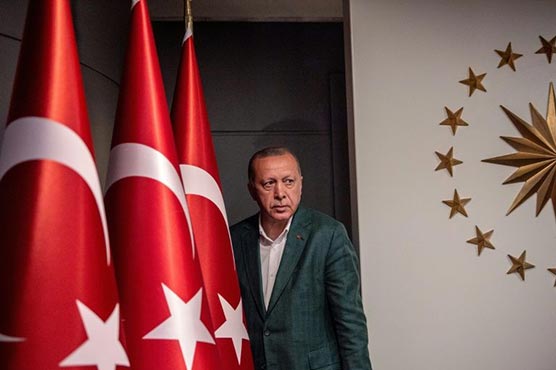 (AFP) – Turkish President Recep Tayyip Erdogan on Monday questioned the results of Istanbul s mayoral elections which his party candidate narrowly lost, saying there had been “theft at the ballot box”.

Erdogan s Justice and Development Party (AKP) demanded a recount in the capital Ankara and Istanbul citing irregularities after tallies showed the party was defeated in both cities last week — in what would be a major setback in a decade and a half in power.

“We are seeing that some organised crimes have been carried out,” Erdogan said at a press conference before a trip to Russia, without giving details. “There is an element of robbery in all of this. There was some theft at the ballot box.”

Erdogan said the margin between the two Istanbul candidates was too small for anyone to claim victory, suggesting when there was a problem with a percentage of votes in other countries, appeals and even new elections were not unusual.

“No one has the right to declare themselves victorious with a difference of around 13,000-14,000 votes,” Erdogan said.

Erdogan s AKP won most votes nationwide in the election, but voters appeared to punish the party in the two big cities with Turkey s economy in recession and inflation in double digits after a currency crisis last year.

Defeat in Istanbul would be especially sensitive for Erdogan who grew up in one of its working-class districts and began his political career as the city s mayor.

Electoral authorities later said Imamoglu was winning by around 20,000 ballots, but that gap has narrowed during a week of recounting. The difference is now less than 16,000 ballots. The two candidates each received more than four million votes.

“The AKP is broadening its appeal in Istanbul every day. The next step could be asking to redo the election,” pro-government columnist Abdulkadir Selvi wrote in Monday s Hurriyet newspaper, but added he did not think the election would be cancelled.

Imamoglu, a former mayor of one of the city s local districts, has already declared himself Istanbul mayor and called on the AKP to accept the result.

The opposition appealed on Monday for electoral authorities to stay impartial.

“I appeal to the jurists at the Supreme Electoral Council: your independence and your objectivity are very important,” CHP party chief Kemal Kilicdaroglu said during a press conference.

AKP vice-president Ali Ihsan Yavuz said: “What we want is for the votes that were made in the ballot box to be recorded as they were actually made.”

After 16 years in power, Erdogan is praised by supporters, especially by more religiously conservative Turks, who say he oversaw a period of economic growth.

But his critics at home and among Western allies say he has undermined democracy by purging dissent, especially after a 2016 failed coup Ankara blames on a US-based Muslim cleric.

In 2017, Erdogan won a referendum that granted him broader executive powers as president.

“The irony is that from an institutional standpoint Erdogan in his consolidated executive presidency is the strongest he s been, but from a political standpoint he s the weakest,” Lisel Hintz, assistant professor of international relations at Johns Hopkins University, said.

Hintz added Erdogan could face “serious splits from within” following the AKP s “less than stellar performance in major urban centres and its inability to get the economy back on track”.

Erdogan campaigned hard portraying the local vote for mayors and district councils as a fight for the nation s survival, but the election became a test of AKP s support after the economic slowdown hit Turkey.