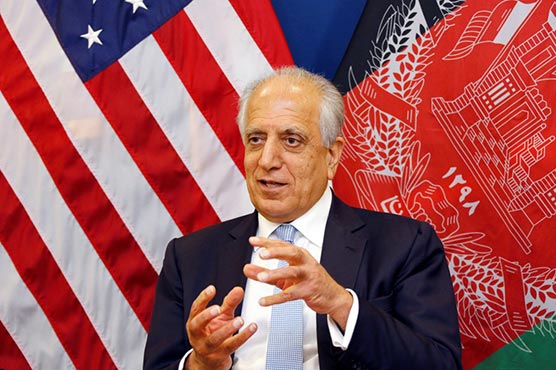 KABUL (Reuters) – The Afghan government named a team on Wednesday to negotiate directly with the Taliban, in the expectation that Washington was on the cusp of agreeing to withdraw troops after 18 years of war, meeting the insurgents  precondition for talks with Kabul.

The U.S. special representative for Afghanistan peace talks, Zalmay Khalilzad, tweeted that he was on his way to negotiation venue Qatar, ready to close a deal to end the war that began in 2001 after the September 11 attacks on the United States.

“I m off to Doha, with a stop in Islamabad. In Doha, if the Taliban do their part, we will do ours, and conclude the agreement we have been working on,” Khalilzad said.

Suhail Shaheen, a spokesman for Taliban s political office in Doha said: “We have completed consultations with our leaders regarding the talks with the U.S, now we are ready and waiting for him (Khalilzad) to restart the talks.”

Khalilzad, an Afghan-born veteran American diplomat, was appointed last year to negotiate a political settlement with the Taliban, who now control more territory than at any point since the United States bombed them out of power in 2001.

They have said they will not talk with the Afghan government about the future of the country until Washington agrees to withdraw its troops.

Khalilzad has been in Kabul, where he met President Ashraf Ghani, top security officials, senior opposition leaders, diplomats and civil society members to discuss the peace process before striking a deal with the Taliban.

“Wrapping up my most productive visit to Afghanistan since I took this job as Special Rep. The U.S. and Afghanistan have agreed on next steps,” he said on Twitter.

Two sources with knowledge of the talks said they could conclude with an agreement on the withdrawal of foreign forces in exchange for security guarantees by the Taliban.

Afghanistan s ministry of peace appointed a 15-member delegation on Wednesday to negotiate with the Taliban. An official at the ministry said Norway could be the venue for intra-Afghan talks.

About 20,000 foreign troops, most of them American, are now in Afghanistan as part of a U.S.-led NATO mission to train, assist and advise Afghan forces. Some U.S. forces carry out counter-terrorism operations. President Donald Trump has announced his aim to end the war.

Taliban spokesman Zabihullah Mujahid said some senior members of its negotiating team were traveling to the Indonesian capital Jakarta, and talks with U.S. officials would resume after they returned to Doha. “I can t say when the talks with the United States will start,” he said.

Many Afghans fear a U.S. troop withdrawal announcement will weaken their bargaining power with the hardline Islamist group, which aims to re-establish an Islamic emirate to replace an elected government it dismisses as puppets of foreign forces.

Women s rights groups in particular worry about the fate of women and girls in the event of a return of the Taliban, who banned girls  education and imposed severe restrictions on women s rights to work outside the home.

Last week the Taliban said talks with the Afghan government would come only after a deal had been struck with the United States on the departure of its forces.

At the peak of the conflict nearly a decade ago, the United States had 100,000 troops in Afghanistan leading a 130,000-strong international force to prevent the Taliban from returning to power. More than 3,400 foreign troops died there, including more than 2,300 Americans.

The United Nations has tallied the deaths of more than 33,000 civilians in the war since 2009, including 1,300 in the first six months of this year. Tens of thousands of members of the Afghan security forces and an unknown number of insurgents have also died in the conflict.