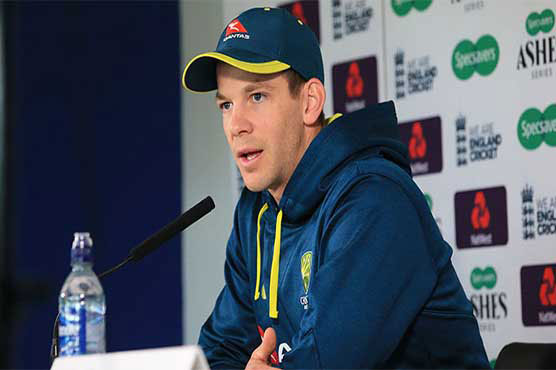 BIRMINGHAM (AFP) – Australia captain Tim Paine says he has no fears about losing his place as he prepares to lead his team in the first Ashes Test against England on Thursday.

The wicketkeeper found himself unexpectedly thrust into a leadership position in the fall-out from last year s ball-tampering scandal in South Africa.

Then-captain Steve Smith and David Warner, his deputy, were stripped of their positions by Cricket Australia after the incident and both were banned from international cricket for 12 months.

Australia s squad for the Ashes includes another wicketkeeper in Matthew Wade, who has already played 22 Tests.

Wade has been in fine form with the bat during the recent Australia A tour of England, scoring three hundreds.

By contrast, Paine has managed just one first-class century in his entire career.

Asked during a pre-match press conference at Edgbaston on Wednesday if he felt under pressure to justify his place, Paine replied: “No, I do not at all. I m 34 years old, I don t really care about my place in the side any more. I m here to do a job.

“I ve been put in this team to captain and wicket-keep to the best of my ability and I ve said before, at 34 years of age, if you are looking further ahead than the next Test match you are kidding yourself.

“I m not going to waste time looking over my shoulder. I m enjoying the job that I m doing.”

With Cameron Bancroft, the man who applied sandpaper to the ball during that fateful Test in Cape Town, also set to be included in Australia s team for the Ashes opener alongside Smith and Warner, there will be a renewed focus on the tourists  on-field conduct.

But the side, under the leadership of Australia one-day captain Aaron Finch, conducted themselves in exemplary fashion during the recent World Cup in England and Wales.

Paine said they were taking their cue from Winston Churchill although there is doubt over whether Britain s prime minister during World War II ever said the words ascribed to him by the Australians.

“We are going to play competitive Test match cricket like every other nation does,” he said.

“Our guys understand what s expected of them and we are role models,” added Paine, with Australia looking to win their first Ashes series in England since 2001.

“There s been a quote going around our changing rooms this week from Winston Churchill and that is  behaviour doesn t lie .

“We can talk all we like about how we are going to play and ultimately you guys will see how we play and judge for yourselves,” added Paine, who said the tourists had been made aware of the quote by assistant coach Brad Haddin, the former Australia wicketkeeper who was renowned for  sledging  or verbally abusing opponents during his playing days.

Meanwhile Paine was glad of the strength in depth of an Australia fast-bowling unit where Pat Cummins, Mitchell Starc, James Pattinson, Josh Hazlewood and Peter Siddle are all vying for a place in the side.

“We are in a really good situation at the moment where we have a number of quality fast bowlers in particular,” Paine sai

“We are lucky that we feel we have a lot of bases covered,” added the skipper who said Australia would name their team at the toss, unlike England, who confirmed their side on Wednesday.

“It s up to us to come up with the best combinations to take 20 wickets.

“Our quicks that have been here before, have learnt lessons from being here before. It s important that we learn from them and put what we ve learnt into practice in this series.”