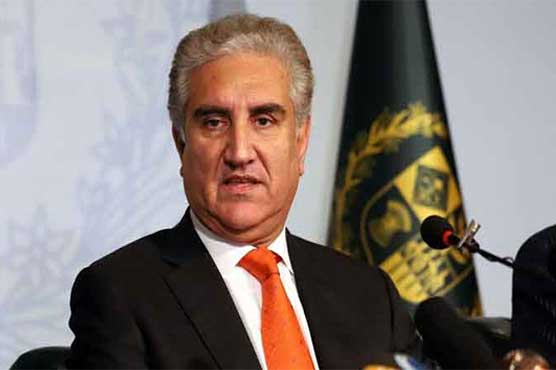 ISLAMABAD (CITY NEWS HD) – Foreign Minister Shah Mehmood Qureshi has on Friday said New Delhi claims that talks over the Kashmir issue will only be held with Pakistan, but is not even willing to conduct a bilateral meeting.
The foreign minister talked to media and maintained that the United States should use its influence over India to solve this dispute.
“Prime Minister Imran Khan had stated that Pakistan will take two steps forward if India takes one to improve relations, but the issue is rapidly getting worse. India should come towards dialogues to settle the Kashmir conflict, and I am forwarding a letter to the UN Secretary General today over this issue.
“Pakistan had given the message of peace before, and is still making the same offer. We want to live peacefully. On the other hand, India raised questions on US President Donald Trump’s statement regarding the mediation offer on Kashmir dispute.
“Our focus at the moment is on Afghanistan peace process, and the stability of the entire region will be at stake if India creates hindrance in it.”
Earlier today, Donald Trump talked to media in Washington and reiterated to mediate Kashmir issue saying, “I would imagine they [Imran Khan and Narendra Modi] could get along very well, but if they wanted somebody to intervene, to help them and I spoke with Pakistan about that and I spoke frankly in (sic) India about it.
“It’s really up to Modi (to accept the offer of mediation). If they wanted me to, I would certainly intervene.”
While responding to US President Donald Trump’s offer to mediate Kashmir issue, External Affairs Minister of India Dr. S. Jaishankar said that any discussion on the matter will only be held with Pakistan.
The minister took to social networking website and told that he has already conveyed to US Secretary of State Mike Pompeo in clear terms that talks on Kashmir conflict will only be bilateral with Pakistan.