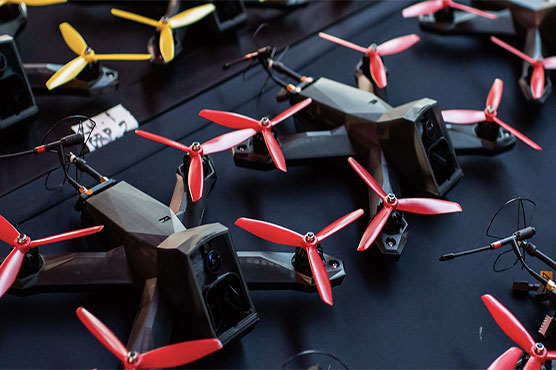 NEW YORK (Reuters) – As the Drone Racing League (DRL) enters its fourth season, it is premiering a new drone all competitors will make use of and is capable of accelerating to 90 mph (145 km/h) in less than one second.

The acceleration is so rapid the league is installing an LED lighting panel on the drone to make sure it remains visible.
In Drone Racing League competitions, all participants use the same model drone, and so it is up to each competitor to manage how the dronemaneuvers through tight spots such as hallways and tunnels as seen on the DRL courses. The drone is controlled via remote.

Its enhanced speed capability is thanks to an advanced powertrain, according to DRL CEO and Founder, Nicholas Horbacweski.
“It’s got our most advanced powertrain ever. It’s got a lot of onboard diagnostic systems that let us read out in real time the status of the drone. It’s got our most powerful latest generation radio to enhance radio connectivity,” said Horbacweski.

Horbacweski said there would be some “exciting” changes to the 2019 season.

“For the first time we’re going to include an undercard circuit of autonomous racing,” he told Reuters. “So these are gonna be A.I. drones racingagainst each other. We call that circuit-air artificial intelligence robotic racing and you will see fully autonomous drones competing.”

According to the league, the Racer4 Street version will also soon be available to the public. The league is currently launching a Kickstarter campaign to launch the new racer.

Sponsored by Allianz, the DRL is growing in popularity and counts on 55 million viewers for its championships, it says.

The upcoming season kicks off Sunday (August 11) at 2 pm ET (1800 GMT) on NBC in the United States and via twitter.com. The championship season live event will be held on September 8 at ChaseField in Phoenix, AZ.