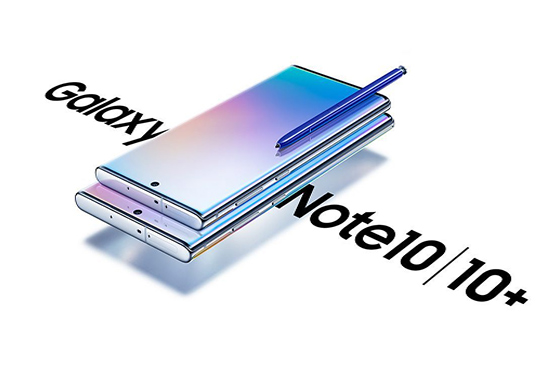 SAN FRANCISCO (AFP) – Samsung unveiled new-generation Galaxy Note large-screen handsets Note 10 and Note 10+ starting at $950 and said it will work closer with Microsoft so that services function better across its array of devices.

The Note 10 “phablet” which is set for release on August 23, comes in two sizes, with the larger beginning at $1,100. The price puts the model at the premium end of a cooling global smartphone market.

The latest generation Note was introduced at a media event in New York by DJ Koh, head of IT and mobile communications, who touted it as “the world’s most powerful mobile device.”

“Every element of the Galaxy Note 10 was designed to help users achieve more,” Koh said.

“Whether they’re finishing a big project for work, capturing and editing a video, or playing their favorite mobile game, the Galaxy Note 10 will help them do it faster and better.”

Samsung’s introduction of the first Note some eight years ago is credited with sparking a “phablet” trend of large-screen mobile devices that combine capabilities of smartphones with the screen size of tablet computers.
Microsoft has long worked with companies behind Windows-powered computers or laptops.

“For years applications were built for single devices, but in a world of 5G, cloud and AI (artificial intelligence) we get to rethink it all,” Nadella said.

“Our ambition is to help people be productive on any device, anywhere. We are very excited about this partnership.”

Versions of Note 10 will be compatible with 5G ultra-fast telecommunications networks that promise to enable stunning new experiences on smartphones or tablets.

Both Note models come with the trademark “S Pen” for writing on screens and gesture controls. The smaller has a 6.3-inch screen while the larger measures 6.8 inches.

Samsung executives called the Galaxy Book S a laptop with the “essence of a smartphone.” It will hit the market in September at a starting price of $999.