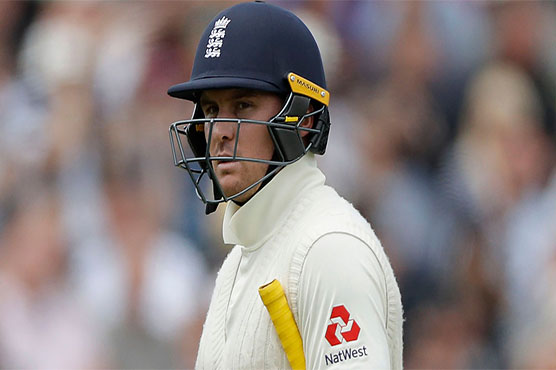 LONDON (AFP) – England have dropped Jason Roy for the fifth Ashes Test against Australia that starts on Thursday, as they look to level the series at 2-2.

One-day specialist Roy was handed his Test debut against Ireland in July after making a devastating impact at the top of the order during England s victorious World Cup campaign.

But the Surrey batsman failed to impress in the first four matches of the Ashes, either as an opener or when he dropped down the order in the fourth Test, where he made a top score of 31.

Paceman Craig Overton has also been left out for the clash at the Oval, with all-rounders Sam Curran and Chris Woakes, who made way for Overton at Old Trafford last week, coming into the side.

The England and Wales Cricket Board confirmed that Ben Stokes would play as a specialist batsman due to a shoulder injury.

England need a victory at the Oval to draw the series, although Australia have already retained the Ashes.

Captain Joe Root said Roy had missed out because the side needed re-balancing due to Stokes s injury.

“It s always tough to leave guys out, but Stokesy obviously picked up a shoulder injury in the last game and won t be able to bowl the overs we normally expect him to,” he said at the London ground on Wednesday.

“With that we ve had to change the balance of the side, and Jason s the unfortunate one to miss out.

“Jason s had an opportunity to come in and play Test cricket, get a feel for it and it s not quite gone how he would have liked.

“But I m sure he ll go away and work extremely hard and come back again and that s what you expect of guys when they get left out.”

Root said it would have been a risk to pick Stokes as a frontline bowler due to the all-rounder s fitness issues but he fully justified his place as a specialist batsman.

The 28-year-old is England s top-scorer in the series with 354 runs and two centuries, including his match-winning ton in the third Test at Headingley.

“He might be able to bowl a couple of overs here and there but his batting, as this series as shown, is a massive part of our side and he rightly deserves to be in our team as just a batter and a top-four batter,” said Root.

“He will I m sure want to find different ways of getting himself into the game even if it s not with the ball.”

England team for the fifth Ashes Test at the Oval: