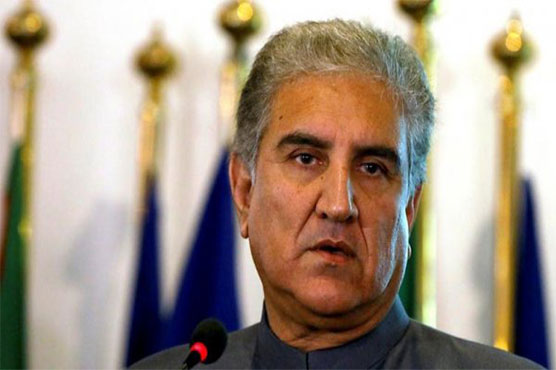 Speaking to journalists on the sidelines of the UN Human Rights Council in Geneva, Shah Mehmood Qureshi said he believed both Pakistan and India “understand the consequences of a conflict.”
But with tensions soaring since New Delhi revoked Kashmir s autonomy last month, he warned that “you cannot rule out an accidental war.”

“If the situation persists… then anything is possible,” Qureshi said.

India imposed a military clampdown on Kashmir from August 5 to prevent unrest as New Delhi revoked the disputed region s autonomy. Mobile phone networks and the internet are still cut off in all but a few pockets.

Tensions over Kashmir, split between India and Pakistan since 1947, have sparked two major wars and countless clashes between the two nuclear-armed arch-rivals.

Qureshi, who on Tuesday appealed to the Human Rights Council to launch an international investigation into the situation in Indian Kashmir, told reporters he had spoken with Bachelet and had invited her to visit both the Indian and Pakistani parts of the region.

“She should visit both places and report as objectively as she can so that the world knows what the true… situation is,” he said.

The minister said Bachelet had said she “was keen to visit”. Her office could not immediately be reached for confirmation.
Qureshi meanwhile ruled out the possibility of bilateral talks to resolve the tensions.

“In this environment and with the mindset that we see in New Delhi today, I do not see any room for a bilateral engagement,” he said, adding that a multilateral forum or a third-party mediator would likely be needed.

“If the US plays a role, that can be important because they have a considerable influence” in the region, he said.

New Delhi, meanwhile, has insisted that the situation in Kashmir is an internal Indian affair, rejecting all international interference in the region.