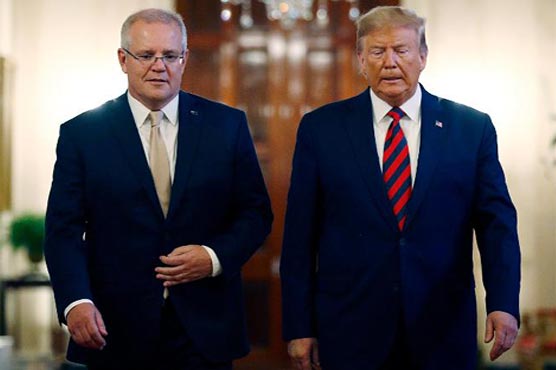 SYDNEY (AFP) – Australia’s prime minister on Wednesday played down the significance of a call from Donald Trump as “brief and uneventful”, despite mounting controversy over a politically fraught offer to help the US president.

Scott Morrison said Trump had simply asked him to establish “a point of contact” within Australia’s government for an investigation that the US president hopes will discredit findings that Russia helped his 2016 election campaign.

Morrison said he was “happy” to fulfil Trump’s request on the basis that the country’s ambassador to the United States, Joe Hockey, had already offered Australia’s assistance in the investigation back in May.

“It was fairly uneventful conversation,” Morrison told Sky News. “We’d said we were prepared to assist and cooperate in that investigation, which is not unusual. The US is a significant — in fact, our most signficant — ally and we’re used to sharing a lot of information.”

“Australia would never do anything contrary to our national interest. It would have been, frankly, more surprising had we chosen not to cooperate.”

Close relations with the United States usually enjoy strong bipartisan support in Australia, but that consensus has been tested since Trump took office — with the revelations surrounding the recent phone call sparking concern that Australia may be co-opted into helping Trump tarnish his domestic political rivals.

Earlier on Wednesday, opposition leader Anthony Albanese demanded to know what information Canberra had turned over to Washington.

“The prime minister needs to explain exactly what went on here. He needs to release any transcript and information which is out there,” Albanese said.

“This is quite extraordinary,” he added. “The prime minister needs to make a full statement.”

Morrison did not disclose what, if anything, Australia had provided to the US, saying that the process was now a matter for officials at the bureaucrat level to handle.

Trump and his media allies have long promoted theories that FBI and other investigations into Russia’s role in the 2016 election were prompted by a pro-Democrat “deep state”.

Those largely unsubstantiated allegations have ensnared allies in Britain, Italy and Australia.

One of the catalysts for the FBI probe was a Trump campaign official admitting to the-then Australian ambassador in London that the Russians had “dirt” on Trump’s rival Hillary Clinton.

The campaign official, George Papadopoulos, was jailed for lying to the FBI, but his allegation that the ambassador — former conservative foreign minister Alexander Downer — was one of several “spies” sent to entrap him has gained currency in Trump’s White House.

Downer reported the conversation to top officials in Canberra and ultimately to US authorities.

Australia’s current foreign minister, Marise Payne, on Wednesday refused to say what “material and information”, if any, was exchanged with Trump.

“It’s not my practice to comment on the use of intelligence to secure material,” she told ABC radio.

But she also sought to quell concerns that her government acted inappropriately — saying it would cooperate with Trump only “as far as we can and as far as is appropriate”.