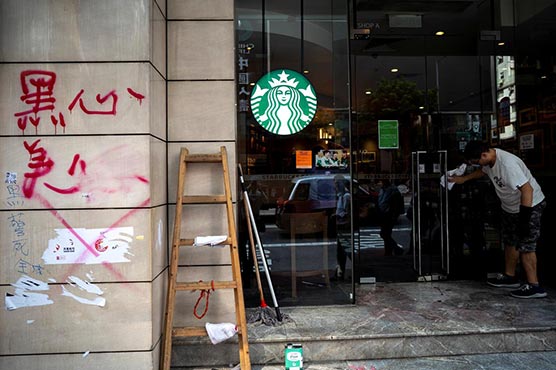 HONG KONG (Reuters) – Hong Kong anti-government protesters are increasingly focusing their anger on mainland Chinese businesses and those with pro-Beijing links, daubing graffiti on store fronts and vandalizing outlets in the heart of the financial center.

Protesters took aim at some of China’s largest banks at the weekend, spray-painting anti-China slogans on shuttered branches and trashing ATM machines of outlets such as Bank of China (601988.SS), while nearby international counterparts such as Standard Chartered (STAN.L) escaped untouched.

Another target was shops operated by Maxim’s Caterers, including American coffee chain Starbucks Corp (SBUX.O), after the daughter of the Hong Kong company’s founder condemned the protesters at the United Nations human rights council in Geneva.

Demonstrators scrawled anti-China graffiti on several Starbucks outlets, including in the bustling tourist and business districts of Causeway Bay and Admiralty.

Companies across Hong Kong, the Asian base for many global businesses, are walking a tightrope between the protesters and China’s Communist Party rulers in Beijing.

Cathay Pacific Airways (0293.HK) became the biggest corporate casualty when China demanded in August that it suspend staff involved in the protest movement that has plunged Hong Kong into its biggest political crisis in decades.

At least 20 pilots and cabin crew have since been fired, the Hong Kong Confederation of Trade Unions has said.