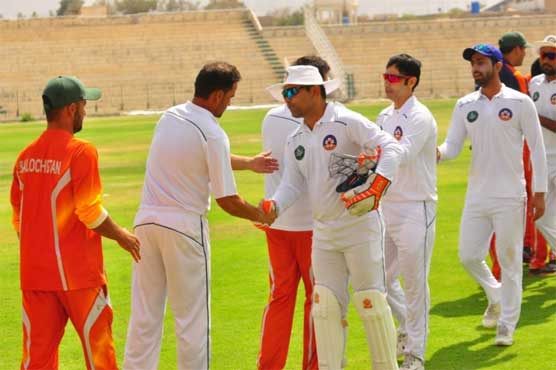 Second consecutive win by an innings’ margin for Central Punjab

LAHORE (Web Desk) – Central Punjab secured their second consecutive win by an innings’ margin as the Azhar Ali-led side beat Balochistan by an innings and 12 runs in the four-day first-class Quaid-e-Azam Trophy fixture at Quetta’s Bugti Stadium.

Off-spinner Bilal Asif picked up four wickets for 33 runs on the last day of the match as the hosts were skittled out 239 in the morning session after resuming their innings at 141 for five, said an official press release by the Pakistan Cricket Board (PCB).

For Balochistan, Bismillah Khan once again put up a fight, scoring 70 from 106 balls. Following up his first innings’ 143-ball 71, the wicketkeeper-batsman hit seven fours and three sixes in his 140-minute stay at the crease before Bilal’s catch off his own bowling sent him back to the pavilion. He had resumed the day on 37.

Abu Bakar, the other not out batsman yesterday, added only 11 more runs to his overnight score to register 44 off 120 balls.

Young pacer Nasim Shah was the other bowled for Central Punjab to pick up a wicket on Tuesday morning as the right-armer picked up the wicket of Ammad Butt.

With their second win of the tournament, Central Punjab consolidated their position at the top of the points table, picking up 24 points – 16 for an outright win, and five and three for scoring more than 400 runs and for bowling the opposition out in 110 overs in the first and second innings of the match.

Balochistan bagged three points from the match, one for taking five Central Punjab wickets by the time 110 overs were completed and two for crossing the 250-run mark in their first innings.

That Central Punjab posted a daunting 521 for six declared after being put into bat by the hosts was due to a profound 237 off 376 balls by Salman Butt. His 549-minute at the stay was studded with 35 fours.

He put up an imposing first-wicket stand of 237 runs with Azhar – who scored 165-ball 123, his second century on trot.

Central Punjab now travel to Abbottabad to play Khyber Pakhtunkhwa in the round four of the first-class Quaid-e-Azam Trophy tournament, which commences from 5 October. Balochistan face Northern in Rawalpindi at the KRL Stadium, which will be live-streamed.

Matches in Abbottabad, Rawalpindi end without a ball bowled on day four