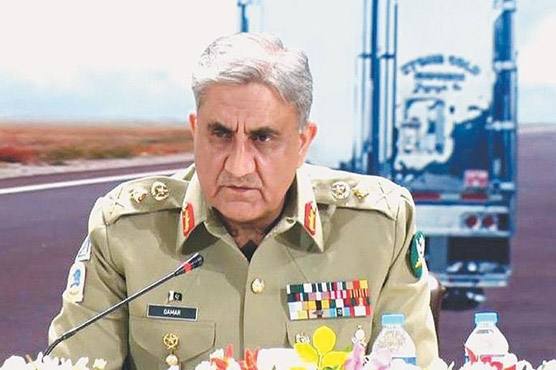 ISLAMABAD – The Supreme Court of Pakistan (SCP) on Tuesday suspended a notification of extension in the service of Chief of Army Staff (COAS) General Qamar Javed Bajwa.

In this regard, the top court has sent notification to the concerned parties involved in the matter and adjourned the hearing till tomorrow.

Justice Asif Saeed Khosa remarked that the Constitution doesn’t allow re-appointment or extension in the service of the army chief.

On August 19, Prime Minister Imran Khan had approved an extension in the tenure of Gen Bajwa for another three years.

“General Qamar Javed Bajwa is appointed Chief of Army Staff for another term of three years from the date of completion of current tenure,” the brief notification issued by the prime minister’s office had said.

“The decision has been taken in view of the regional security environment,” the document with the logo carrying the emblem of Prime Minister of Pakistan and an official number; PMO/ 3232/M SPM/19, dated Aug. 19 had read.

The situation in the region got tense following the unilateral decision India to revoke the special status of occupied Kashmir. Tensions between nuclear-armed states increased after Modi-led Hindu nationalist government revoked articles 370 and 35A, of its Constitutions through a rushed presidential decree, which had secured special autonomy of Jammu and Kashmir.

General Bajwa took command of the Pakistan Army on Nov. 29, 2016 as the 16th Chief of Army Staff when the country had been fighting a fierce war against terror, and faced internal and external challenges.

After joining the Pakistan Army in 1978, Bajwa was sent to enrolled at the Pakistan Military Academy (PMA) in Kakul, and passed outfrom the PMA Kakul where he gained commissioned as 2nd-Lt., on 24 Oct. 1980 in the 16th Baloch Regiment at the Sialkot Cantonment – the same unit that his father commanded.

In 1992, Major Bajwa briefly served in the 5th Northern Light Infantry Regiment in Kashmir. In addition, Lieutenant-Colonel Bajwa served in the X Corps, stationed in Rawalpindi, as a staff officer. Upon promoting as one-star rank army general, Brigadier Bajwa served as the Chief of Staff (COS) at the X Corps before promoting to the two-star rank and commanding a division in Northern Pakistan.

In 2007, Brig. Bajwa commanded the Pakistan Armed Forces-Africa Command, attached to the UN peacekeeping mission MONUSCO, in Congo Brig. Bajwa served in the Congo as a brigade commander under then-Major General Bikram Singh, the former Chief of the Army Staff of the Indian Army from 2012–14. Gen. Singh later termed Bajwa’s performance there as “professional and outstanding.”

After being promoted to two-star rank in May 2009, Major-General Bajwa took over the command of the Force Command Northern Areas (FCNA) as its GOC, stationed in Gilgit-Baltistan, Pakistan.

In Aug. 2011, he was honored with the Hilal-i-Imtiaz (Military), and posted as an instructor at the School of Infantry and Tactics in Quetta, and later taught staff course at Command and Staff College in Quetta, and course on national security at the National Defence University.

On 14 Aug. 2013, Maj-Gen. Bajwa was promoted to three-star rank and posted as field commander of the X Corps, stationed in Rawalpindi. He was appointed as Grade-I officer during his tenure as field commander of the X Corps. The appointment was commented in the news media that noted that Lt-Gen. Bajwa had been posted in X Corps thrice, which is the army’s important and largest corps, which has experience of keeping control over the situation in Kashmir.

In 2014, Lt-Gen. Bajwa was appointed as Colonel Commandant of Baloch Regiment.

On 22 Sept. 2015, Lt-Gen. Bajwa was posted in the Army GHQ when he appointed as the Inspector-General of the Training and Evaluation (IGT&E) where he was a Principal Staff Officer to then-Chief of Army Staff, General Raheel Sharif.