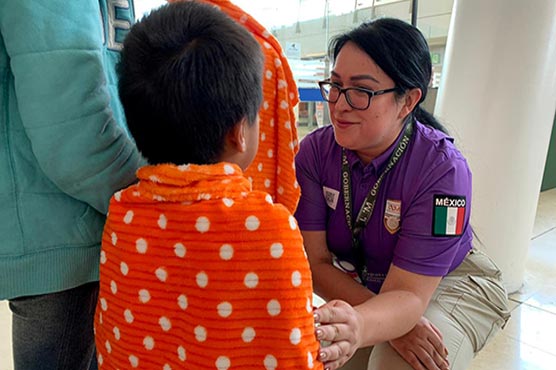 U.S. deports Mexicans far from border, may send others to Guatemala

The flight carrying Mexican deportees from Tucson, Arizona, landed in the central city of Guadalajara around midday. One immigration shelter in the city said it had been informed of a likely influx of deportees.

U.S. President Donald Trump has made clamping down on unlawful migration a top priority of his three-year-old term in office and his 2020 re-election campaign.

Numbers of Central American migrants apprehended at the border fell sharply in the second part of 2019 after Mexico deployed National Guard troops to stem the flow, under pressure from Trump.

With fewer Central Americans at the border, U.S. attention has turned to Mexicans crossing illegally or asking for asylum. Around 150,000 Mexican single adults were apprehended at the border in fiscal year 2019, sharply down from previous decades but still enough to bother U.S. immigration hawks.

In another sign of the new focus on Mexicans, Acting Deputy U.S. Department of Homeland Security Secretary Ken Cuccinelli said an agreement that lets U.S. immigration officials send asylum seekers to Guatemala to request refuge there instead could also apply to Mexicans and other nationalities.

“As we fully implement the agreement, all populations are being considered, including Mexican nationals,” Cuccinelli said on Twitter.

His comments were echoed by Guatemala’s Interior Minister Enrique Degenhart, who told Reuters he had analyzed whether Mexicans could be included in the program, which is similar to the “safe third country” arrangement in Europe that outsources asylum to Turkey.

Degenhart said the idea of including Mexicans had not been implemented so far but could not be ruled out.

“Right now, it is only being used with Central Americans,” he said, pointing out that Mexicans were not part of the long- standing pact that allows Central Americans to move freely between each others’ countries.

Mexico’s foreign ministry did not immediately respond to a request for comment about Cuccinelli and Degenhart’s remarks.

Mexico said it had requested the flights to keep deportees away from dangerous border cities, while a senior DHS official said the flights were in response to rising numbers of Mexican nationals arrested at the U.S.-Mexico border.

Mexicans made up nearly half of all migrants caught between October and December, according to U.S. Customs and Border Protection data.

John Sandweg, a former acting director of U.S. Immigration and Customs Enforcement during the Obama administration, said the program would help stop Mexican migrants from simply crossing again once they had been deported.

“It’s a lot cheaper to just return Mexicans across the border,” he said. “But the real benefit is the recidivism rate.”

A bus ride from Guadalajara to Nogales, a Mexican border city across from the U.S. state of Arizona, can take more than a day.

The flights could be scaled up quickly in the coming weeks, said the DHS official, who was not authorized to speak publicly. The Mexican foreign ministry said the flights would begin on a regular basis in January.

The U.S. official added the return flights may expand beyond Guadalajara, Mexico’s second-biggest city, to other parts of Mexico.

Acting ICE Director Matt Albence said in a written statement on Thursday that the interior repatriations would allow Mexican nationals to be returned closer to their homes and discourage future border-crossing attempts.

The flight from Tucson to Guadalajara on Thursday carried approximately 150 Mexican deportees, according to ICE.

The United States has in recent years mainly deported Mexicans to border towns, although in the past it also flew them to cities in the interior.