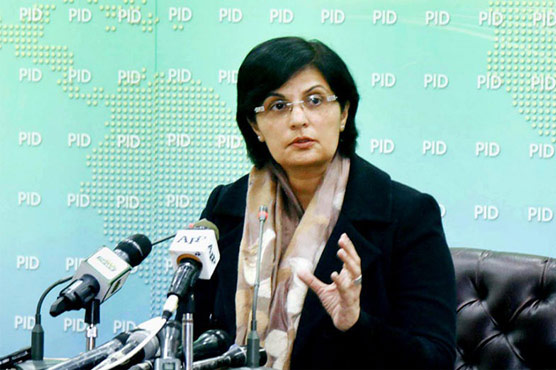 ISLAMABAD (City News) – The government has raised the quarterly grant from Rs5,000 to Rs5,500 for 4.3 million beneficiaries under the Ehsaas Kifalat Programme of the Benazir Income Support Programme (BISP), Special Assistant to the Prime Minister on Social Protection and Poverty Alleviation and BISP Chairman Dr Sania Nishtar said in a statement.

Around 800,000 “non-deserving” beneficiaries of the BISP have been disqualified for giving space to the needy people on the basis of promoting transparency and merit, Dr Sania Nishtar had revealed on Thursday.

During a press conference in Islamabad, Dr Sania had asserted that measures have been taken to secure due rights for the deserving people only, and that whole procedure for inclusion in BISP has been made apolitical.

She had said that the disqualification criteria includes travel history of the member, vehicle ownership, availing facility of executive services for passport and National Identity Card (NIC) and service in government sectors.

She had termed inclusion of 216 villages located alongside restive Line of Control (LoC) in Kifalat Program “another milestone of the Ehsaas Programme.”

She had said people of these villages were the most deserving due to their frequent economic losses as due to cross border firing from the Indian side of the border.

On Tuesday, the federal cabinet had approved removing 820,165 beneficiaries from the BISP database, while terming them as “undeserving”.

Importantly, Dr Sania had also informed the cabinet that in view of some complaints and a need to update the BISP data, the survey was reexamined with the help of the National Database and Registration Authority (NADRA).

She had said that during the reexamination some aspects were analysed. For example, she added, it was ascertained whether the family of a beneficiary had any motorcycle or car or whether a spouse was a government employee. The cabinet was told that those who had over 12 acres of land did not fall in the category of “deserving” people. After the exclusion of 820,165 people, really deserving people would be included in the programme.

The alterations in the BISP database have been made after some cabinet members had expressed reservations in the previous meetings claiming that the supporters of opposition parties, particularly those backing the Pakistan Peoples Party (PPP), were benefiting from the programme, while those belonging to the ruling Pakistan Tehreek-e-Insaf (PTI) were being neglected.

The data has revealed that more than 140,000 people from more than 800,000 beneficiaries, who are removed from the programme, were those who or their spouses were government employees.

Furthermore, a person who can pay Rs1,000 of telephone bill on monthly basis is not considered “eligible” to get monthly stipend from the programme and, hence, 24,546 people were removed under this category. Likewise, 155,767 were discarded from the database as their spouses paid Rs1,000 or more telephone [PTCL, mobile] bill.

A total of 36,970 people were thrown out from the list of BISP beneficiaries because three or more than three members of their family paid executive fees for obtaining CNICs.