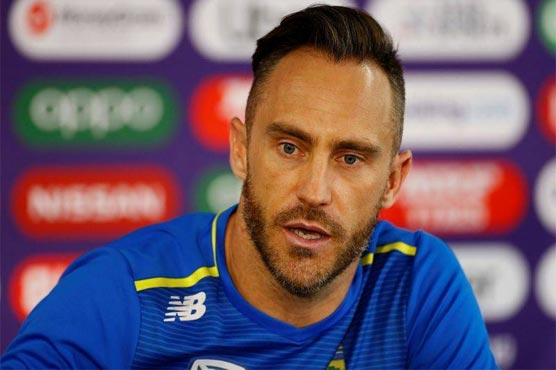 CAPE TOWN (Reuters) – South Africa captain Faf du Plessis has warned his team against complacency as they take a 1-0 series lead into the second test against England, from whom he expects a backlash at Newlands on Friday.

The 107-run victory in the first test in Pretoria on Sunday arrested a run of five successive test defeats for South Africa but any thoughts that the players might have about being back on course must be dispelled, he said on Thursday

“There is a lot that still needs to happen for us to go where we want to go as a test team.

“For me it’s about understanding as a team that the standards need to go up a little bit.

“We were fortunate that we could get away a win in Pretoria but we understand that test cricket against England is not always going to go our way,” he continued.

“If you take your foot off the gas and complacency creeps in, we’ll go back to playing just ordinary test cricket.

“This is the message that Bouch (coach Mark Boucher) and I have been trying to drive home over the last days, and we’ll keep driving it.”

Du Plessis confirmed that batsman Temba Bavuma was fit again but would not get back his No. 5 slot in the team as Rassie van der Dussen will be given more opportunity to prove his worth after scoring a 50 on debut last week.

Bavuma’s exclusion means that South Africa are dispensing with their racial quota for team selection where every team should have at least two black Africans and four others from the country’s mixed-race and Indian communities.

South Africa fell short of that target in Pretoria and will do so again in the second test but Du Plessis looked to downplay a potential controversy.

“Temba will be the first to acknowledge that he got a really good opportunity and that no fingers can be pointed.”

Bavuma, 29, has had no half centuries in his last 12 test innings with his batting average dipping now to 39.24 in 39 test matches