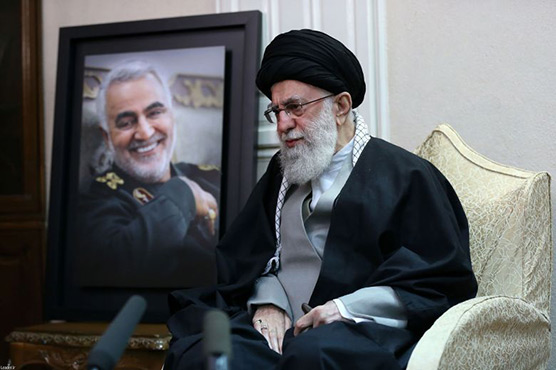 DUBAI (Reuters) – Tensions between Iran and the United States are at their highest point since Iranian students seized the U.S. Embassy in Tehran in 1979.

Iran’s clerical and military rulers have threatened revenge for an American air strike here at Baghdad airport on Friday that killed Qassem Soleimani, commander of Iran’s elite Revolutionary Guards Quds Force and architect of its growing military influence in the Middle East.

Here are some of Iran’s options

Iranian Supreme Leader Ayatollah Ali Khamenei and U.S. President Donald Trump have talked tough during several crisis but neither have indicated an interest in all-out war.

But the possibility of a military confrontation cannot be ruled out. Khamenei faces a dilemma.

If he calls for restraint, he could look weak at home and among proxies who have expanded Iran’s reach. For this reason, Iran may choose to opt for a smaller scale retaliation.

According to a U.S. Defence Intelligence Agency (DIA) report in December, Iran’s military power relies on three core capabilities: its ballistic missile programme, naval forces that can threaten navigation in the oil-rich Gulf and its militia proxies in countries such as Syria, Iraq and Lebanon.

In retaliation for the killing of Soleimani, Tehran or its proxies could attack oil tankers in the Gulf and Red Sea, a major global shipping route for oil and other trade, linking the Indian Ocean with the Mediterranean via the Suez Canal.

BLOCKING THE STRAIT OF HORMUZ

A military confrontation or heightened tensions could halt the flow of oil through the Strait of Hormuz, where one-fifth of the world’s oil production is shipped through. Such interruption, even for a short period of time, could affect the United States and many countries around the world.

Iran cannot legally close the waterway unilaterally because part of it is in Oman’s territorial waters. However, ships pass through Iranian waters, which are under the responsibility of Iran’s Islamic Revolutionary Guards Navy.

Tehran could use its missiles and drones, mines, speedboats, and missile launchers in the Gulf area to confront the United States and its allies.

In recent years, there have been periodic confrontations between the Guards and the U.S. military in the Gulf. U.S. officials have said closing the Strait would be crossing a “red line” and America would take action to reopen it.

The targeted killing of Soleimani could endanger U.S. forces stationed in the Middle East. Iran mainly relies on asymmetric tactics and its regional proxies in order to counter more sophisticated U.S. weaponry.

Iran has passed on its drones and technical expertise to allies. Yemen’s Houthis have used Iran-made missiles and drones to bomb airports in Saudi Arabia, Iran’s main regional foe.

The United States and Saudi Arabia have accused Iran of carrying out attacks against oil tankers near the Strait last year and have accused Tehran of being behind attacks on the kingdom’s oil facilities in September. Tehran has denied the allegations.

Iran-backed militias in Iraq have used mortars and rockets to attack bases where U.S. forces are located. In June, Iran came close to war with the United States after Tehran downed a U.S. drone with a surface-to-air missile, a move that nearly triggered retaliatory strikes by Washington.

Iran is unlikely to rush into action, according to Ali Alfoneh, senior fellow at the Arab Gulf States Institute in Washington.

“Iran has no choice but to strike back and retaliate assassination of Major General Suleimani,” he said. “But the Islamic Republic is patient and the timing and nature of that strike is not yet known to us.”

Iran and its allies have proven they have a long reach.

In 1994, an Iran-backed Hezbollah member drove a van filled with explosives to the Argentine Jewish Mutual Aid Society (AMIA) building, killing 85 people. Argentina blames Iran and Hezbollah for the attack. Both deny any responsibility.

Argentina also blames Hezbollah for an attack on the Israeli embassy in Buenos Aires in 1992 that killed 29 people.

U.S. and Argentine officials say Hezbollah operates in what is known as the tri-border area of Argentina, Brazil and Paraguay, where an illicit economy funds its operations.

“What is more likely is sustained proxy attacks against U.S. interests and allies regionally and even globally. Iran has a long history of such attacks in Europe, Africa, Asia, and Latin America, with mixed success,” Carnegie’s Sadjadpour wrote on Twitter.

Iranian leaders have in the past kept the door open to diplomacy to achieve its aims, especially when its economy is squeezed hard by U.S. sanctions designed to weaken the leadership.

“Iran and America have worked together in the past, in Afghanistan, Iraq and other places. They have common interests and common enemies. A military confrontation will be costly for both sides. But diplomacy can solve many problems and it is an option,” said a senior regional diplomat.

Iran has ruled out any talks with the United States unless it returns to a 2015 nuclear deal and lifts all sanctions it reimposed on Tehran after exiting the pact in 2018. Signalling that the door was open for diplomacy, U.S. Secretary of State Mike Pompeo said after Soleimani’s killing that Washington was committed to reducing tensions in the region.

“While many are predicting WWIII, the last 40 years of Iran’s history reflect that what’s paramount for the Islamic Republic is its survival. Tehran can ill-afford a full-blown war with the U.S. while facing onerous economic sanctions and internal tumult, especially without Soleimani,” Sadjadpour said.