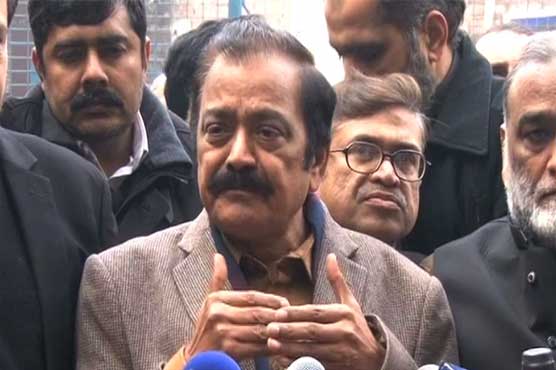 LAHORE (City News) – Pakistan Muslim League-Nawaz (PML-N) MNA Rana Sanaullah Khan on Saturday asked the government to bring forth the “video” as evidence in the narcotics case against him, or otherwise the indictment would not be accepted.

In his talk to the media after appearing in the courtroom amid tight security measures, the former law minister also stated that an open trial of the case must be held.

He demanded Federal Minister for Narcotics Control Shehryar Afridi to present the video in the court that the latter had claimed of on the floor of the National Assembly accusing the former.

“If this is the case, then the video must be submitted to the court to back up the minister’s claim, he added, while claiming that the Lahore High Court (LHC), in its decision on his post bail plea, stated that the possibility of “political vengeance” in the case could not be ruled out.

The PML-N leader also denounced the law enforcement agencies for denying court entry to the media personnel, saying they have the right to witness the trial proceedings.

He claimed that the government was being exposed during investigation into the drug case against him, and he had been falsely implicated in it at the behest of the government.

“Nawaz Sharif’s message for politicians and the parliament carries considerable prestige,” he said, outlining that the message refers to adopting parliamentary methodology.

On Dec. 26, Sanaullah was released from camp jail after the LHC granted him bail in the same case.

The PML-N MNA was released after furnishing two surety bonds worth Rs1 million each as directed by the LHC bench that approved his bail plea via a short order on Dec 24.

The LHC bench in its written verdict recording the reasons that compelled it to grant the PML-N leader bail after arrest said the trial court hearing the drug case against the accused had already granted bail to co-accused, which was not even challenged by the Anti-Narcotics Force (ANF) before the high court.

On Oct. 2, the PML-N leader had filed a bail petition in the LHC. The petition was, however, withdrawn the next day, to file the same at a later stage. Earlier this month, Sanullah once again approached the LHC for post-arrest bail.

A special court for Control of Narcotics Substance (CNS) had on September 20 also dismissed a bail petition by Sanaullah while releasing five co-suspects. On November 9, a CNS dismissed another bail petition of Sanaullah’s.

The court also issued notices to the investigation officer seeking a response on the application of Rana Sanaullah for provision of a video of the ministers.

On July 1, Sanaullah was arrested by the ANF after the discovery of a large stash of contraband in his vehicle from near the Sukheke area in Punjab. The next day, he was sent to jail on judicial remand by a local magistrate.

Sanaullah, who is also a member of the National Assembly (MNA) and president of the PML-N’s Punjab wing, was arrested while travelling with his guards to a meeting from Faisalabad to Lahore.

The first information report (FIR) was lodged under section 9 (C) of Control of Narcotic Substances Act 1997, which carries death penalty or life imprisonment or a jail-term that may extend to 14 years along with a fine up to Rs1 million.