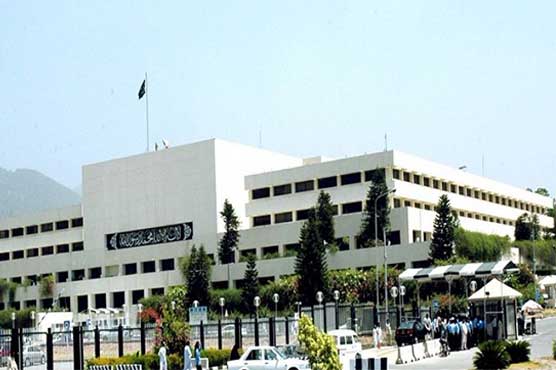 ISLAMABAD (Dunya News) – The Senate and National Assembly sessions, which had been scheduled for today, are postponed till Monday at 03:00 PM and 04:00 PM respectively.

The Senate of Pakistan said in a tweet that the session will not be held as scheduled on Saturday, January 4 at 03:00 PM as it has been rescheduled for Monday, January 6 at 03:00 PM.

The National Assembly of Pakistan tweeted that Speaker Asad Qaiser has changed the schedule of the session on January 4 at 11:00 AM to Monday, January 6 at 04:00 PM.

Speaker @NAofPakistan in exercise of powers conferred under rule 49 sub rule 2 of rules of procedure and conduct of business in NA 2007 has been pleased to change the schedule of the session to be held on 4 Jan at 11 am. #NASession will now held on Mon, 6th Jan 2020 at 4.00 pm pic.twitter.com/SgEWAoBB22

The Senate and National Assembly sessions were scheduled on Saturday to get the three bills approved. Both houses will now take up the matter on Monday.