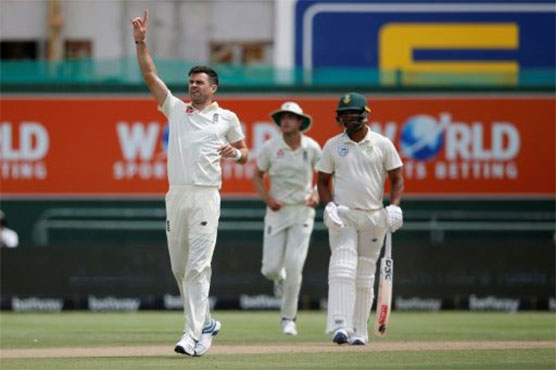 CAPE TOWN (AFP) – James Anderson set another bowling record at Newlands on Sunday but kept his praise for England s batsmen whose dogged performances, typified by Dom Sibley s 85 not out, left them in control of the second Test against South Africa at Newlands.

Anderson, 37, began the day by taking the last two wickets as South Africa were bowled out in their first innings for 223.

That secured a lead of 46 which by the close had stretched to 264.

Anderson s 5-40 marked the 28th time he had taken five wickets in an innings, moving clear of the record for an Englishman he had held with Ian Botham.

But it was the assiduous batting of Sibley, Joe Denly and Joe Root on an awkward, slow pitch, that has set England up with a chance of levelling the four-match series.

Sibley s 85 not out – his first Test half-century – came in just under six hours at the crease and was carved from 222 balls.

The 24-year-old came into the match having scored only 71 runs at an average of 14.20 in his first three Tests but the tall, strongly-built opener showed the powers of concentration and patience that brought him 1,324 runs in the 2019 county championship for Warwickshire.

“We knew he could do it,” said Anderson. “Hopefully this is the start of something big for him.”

Sibley added 72 in 33 overs with Denly and then 116 in a third-wicket partnership with captain Root.

“Joe (Root) came in and wanted to get things moving,” said Anderson. “That partnership has put us in a good position for tomorrow (Monday).”

“I think it was a great innings by him,” said Boucher.

“Technically a lot of people have been speaking about his batting but he showed a lot of discipline outside the off stump with the new ball, which was very important on this wicket.”

Boucher said Sibley s application had provided the foundation for Root, who made made 61 off 98 balls, to play his natural game.

Root was caught at slip off Dwaine Pretorius shortly before the close.

The ball that got him was an exception in deviating from a crack outside off stump that was far more of a factor on the first two days.

South Africa ended a frustrating day with nightwatchman Dom Bess gloving a catch behind off Anrich Nortje off what proved to be the last ball of the day.

The batting consolidated England s advantage after the 37-year-old Anderson and Ben Stokes combined to stymie any chance of the South African tail wagging.

Anderson had Kagiso Radaba caught behind by Jos Buttler to the first ball of the day and then completed his five-for by having Nortje caught at slip by Stokes.

“I m happy to be back in the wickets,” said Anderson who was off form in the first Test defeat.

“I was a bit disappointed with my performance (in the first Test) in Pretoria but this week I felt in really good rhythm.”

That catch meant Stokes equalled the world Test record of five catches in an innings, which had been achieved 11 times previously, most recently by Steve Smith of Australia in 2017/18, also at Newlands.

It was the first time in 1,020 Test matches that an England fielder held five catches.

On a cool, overcast day, there was little in the pitch for South Africa s bowlers who were unable to gain any swing, either conventional or reverse.

The application of the heavy roller before play and after the South African innings seemed to have removed some of the life from the pitch, something which encouraged Boucher to believe that his team could still chase down a target of 330 or 340.

For that they need early wickets when the new ball becomes available after one over on Monday.

In spite of that optimism Boucher admitted: “Our backs are up against it.”