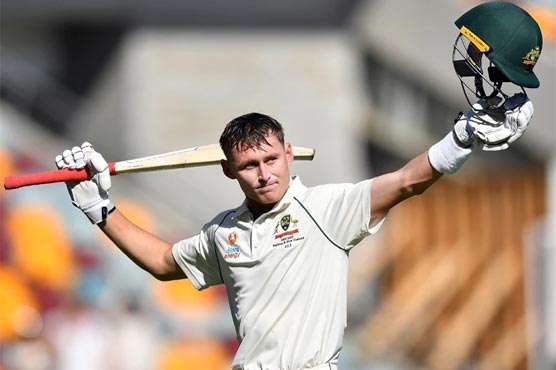 Gum, runs and a ‘light sabre leave’ – the starry rise of cricket’s Labuschagne

SYDNEY (AFP) – Australia’s Marnus Labuschagne has joined the stars of world cricket in just five months, soaring to fourth in the batting rankings from a nondescript 110th after seizing a freak opportunity with both hands.

Labuschagne emerged from nowhere to become Test cricket’s leading scorer last year with 1,104 runs, including 896 since November — bettering the great Neil Harvey (834) for most runs scored by an Australian in a five-Test summer.

“I haven’t really had a chance to stop and reflect on the summer that I have had,” Labuschagne said after his double century against New Zealand last week in Sydney.

“Looking at it, it has been a very special summer but the real privilege is playing in this team.”

None of this may have happened if Labuschagne had not grabbed his chance as a concussion substitute during Australia’s Ashes campaign in England last August.

It was during the second Test at Lord’s when master Australian batsman Smith was felled by a vicious bouncer off England paceman Jofra Archer in the second innings.

Smith’s departure opened the way for Labuschagne to become the first concussion substitute in a Test match after a change in the International Cricket Council’s regulations.

He made the most of his opportunity, reeling off four consecutive half-centuries and finishing the Ashes series with 353 runs at 50.42 — even earning comparisons with the stellar Smith.

If Labuschagne’s career took off during the Ashes, it has rocketed into the stratosphere this Australian summer.

He peeled off two centuries against Pakistan, finishing the two-Test series with 347 runs at 173.50, and he was at another level against the Black Caps.

The gum-chewing number three scored 143 in Perth before reaching his highest Test score of 215 in the third Test in Sydney.

“People like Marnus, you see someone with incredible work ethic, incredible hunger to get better, very coachable and incredible energy,” said Australia coach Justin Langer, who plucked Labuschagne from relative obscurity to play for the national team.

“He brings so much to the team, not just batting and bowling.”

Such has been Labuschagne’s growing profile that Australia batting great Ricky Ponting has tagged him as a potential future Test captain.

“Labuschagne is one that will come into the conversation in 12-18 months’ time once he’s properly established himself in the team,” Ponting said.

“He seems like the right sort of guy to maybe be a captain down the track at some point.”

Another former Australia captain Greg Chappell says Labuschagne has the temperament and technique to become one of Australia’s best number three batsmen alongside Ponting, Don Bradman and himself.

“He has always had a solid technique and shots on both sides of the wicket,” Chappell said.

“He is always looking to get a single, looking to get off strike, looking for the bad ball… they are the traits that I have seen in nearly 70 years of watching cricket that the good players have.”

Labuschagne has been an avid watcher of team-mate Steve Smith’s quirky batting technique and has adopted his extravagant ‘light sabre leave’, mimicking Smith’s flourish after leaving the ball outside off-stump.

Labuschagne understands the rich history of batting greats Australia has had coming in at one wicket down, declaring the role had been a “pinnacle one for Australia and there is a lot that comes with that”.

“The standard is so high. For me, it’s about upholding that standard,” he said.

“That is making sure I am sticking to the process and trusting my game and not trying to be anyone else — making that position mine in my own way.