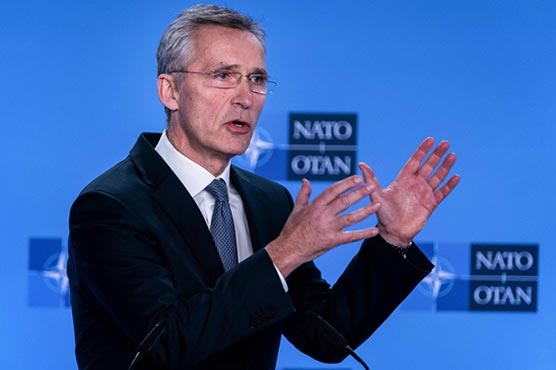 At an emergency session of NATO’s ruling council, US officials briefed allies on the operation that killed Qasem Soleimani, head of Iran’s Middle East operations as commander of the Revolutionary Guards’ Quds Force, at Baghdad airport on Friday.

Stoltenberg stressed that the drone strike, which killed at least 10 people, was a “US decision” but said the other 28 NATO members had repeated their longstanding concerns about Iran’s destabilising activities in the Middle East.

Asked twice whether any member states criticised the US strike, Stoltenberg stressed their unity and their concern about Iran’s behaviour.

“We have recently seen an escalation by Iran, including the strike on a Saudi energy facility, and the shoot-down of an American drone,” Stoltenberg said.

“At our meeting today, Allies called for restraint and de-escalation. A new conflict would be in no-one’s interest, so Iran must refrain from further violence and provocations.”

Elsewhere, EU foreign ministers will hold their own crisis talks on the situation on Friday, diplomats told AFP, as Europe scrambles to defuse tensions and salvage the Iran nuclear deal, which is hanging by a thread.

Tehran has vowed to avenge Soleimani, one of Iran’s most popular public figures and a key player in its network of alliances and proxy forces around the Middle East, while US President Donald Trump has threatened “major retaliation” if any American targets are hit.

Stoltenberg has spoken by telephone with US Secretary of Defence Mark Esper since Friday’s strike, but the killing of Soleimani surprised many of Washington’s allies and triggered calls for de-escalation.

At Monday’s meeting the US “provided the rationale behind the action against General Soleimani”, Stoltenberg said but refused to give further details.

The situation has also deteriorated in Iraq, where lawmakers have called for the 5,200 US soldiers deployed there to leave.

NATO maintains a 500-strong mission in Iraq, preparing local forces to take on Islamic State group extremists, but its core training activities have now been suspended until the security situation improves, Stoltenberg said.

A NATO diplomat told AFP the alliance would have to “wait and see” how Baghdad responds in the coming days.

“From our point of view the parliament resolution is not binding. We take note of it, but have to wait what the government is going to do,” the diplomat said.

“We still think that the presence of international troops in Iraq should be continued in order to prevent a resurgence of Islamic State. But we have to respect what the Iraqi government will eventually decide.”

Britain, France and Germany issued a joint statement late on Sunday urging Iran to “refrain from further violent action or proliferation” and criticising the “negative role” Tehran played in the Middle East through Soleimani’s forces.

Iran was also warned not to flout the 2015 nuclear deal, which Washington pulled out of in 2018, after announcing further steps away from the beleaguered accord.