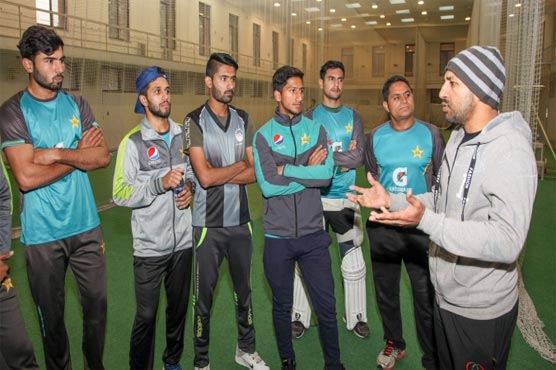 LAHORE (City News) – Sarfaraz Ahmed, the captain of the Pakistan side which lifted the ICC U19 Cricket World Cup in 2006, made a visit to the ongoing Pakistan U19 camp at the National Cricket Academy on Monday and shared his experience of playing the biggest age-group cricket tournament, said an official press release by the PCB.

Pakistan boasts two U19 World Cup wins – the last one came under the wicketkeeper-batsman’s captaincy in 2006 with a memorable win over arch-rivals India by 38 runs in a low-scoring final in Colombo.

After leading his country to the title, Sarfaraz made his debut for Pakistan national men’s team the next year in an ODI against India at Jaipur.

He believes the upcoming ICC U19 Cricket World Cup, which will be played in South Africa from 17 January to 9 February, will serve as a stepping stone for the teenaged cricketers in the squad.

Sarfaraz Ahmed said: “I have told the boys this is a perfect platform to graduate to the next level as we had also gone through this route.

“Naseem Shah and Shaheen Shah Afridi are prime examples, they came from this set-up and are now a part of the national team.

“I have a feeling that this team has the capability to beat any team in the competition and has the fire power to win the tournament. The momentum is on their side. They’ve had a good 2019 as they performed very well in South Africa and other recent series.

“I have great memories of my time in the U19 side. The best one is the final which we won in the 2006 World Cup. The way we won it, I am going to remember it for the rest of my life. We had a brilliant time and we played like one.”

Pakistan start their ICC U19 World Cup campaign on 19 January against Scotland U19.

The Rohail Nazir-led side is in Group C with Bangladesh, Zimbabwe and Scotland.

Gum, runs and a ‘light sabre leave’ – the starry rise of cricket’s Labuschagne