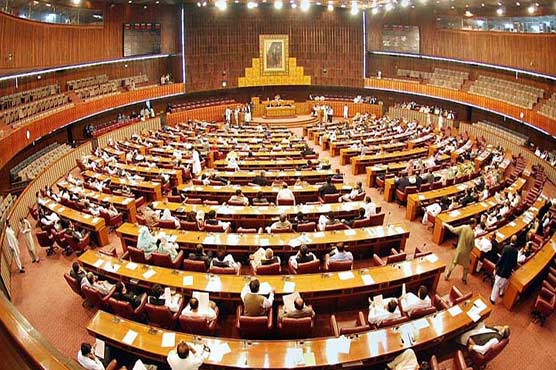 ISLAMABAD (City News) – The National Assembly (NA) on Tuesday will hold debate on the three amendment bills regarding extension in the tenure of the services chiefs and chairman of joint chiefs of the staff committee after approval from NA standing committee on defence.

Earlier, National Assembly Standing Committee on Defence had unanimously approved the three bills concerning tenures of the services chiefs and the chairman of joint chief of staff committee.

The session was chaired by Defence Minister Pervez Khattak in which Chairman Standing Committee on Defence Amjad Khan and other government representatives were also present.

Earlier, Federal Cabinet had approved amendment in Army Act for an extension in the tenure of all military chiefs.

The retirement age of three armed forces will be 64 years. The proposed bill stated that the Prime Minister of Pakistan can advise an extension in the tenure of any service chief.

It is pertinent here to mention that the top court had allowed extension/reappointment of Army Chief General Qamar Javed Bajwa for another six months and asked the government to determine the tenure, terms and conditions of the service of the army chief through legislation within the period.

• The Pakistan Army Act, 1952, falls deficient of the structural requirements for raising and maintaining an Army under clause (3) of Article 243 of the Constitution. It does not provide for essential elements required to raise and maintain an Army, particularly the grant of commissions in the Army and the terms of service of the commissioned officers including tenure and extension of a general.

• No tenure or age of retirement for the rank of general is provided under the law. As per the institutional practice a general retires on completion of a tenure of three years. Although an institutional practice cannot be a valid substitute of the law required to be made under clause (3) of Article 243 yet in the absence of such law the said practice can be enforced to remove uncertainty as to the tenure of a general and to make the constitutional post of COAS functional. However, in the first instance, the matter should be allowed to be regulated by law, made by the legislature, as mandated by the Constitution.

• There is no provision in the law for extending service of a general for another tenure; nor is there any consistent and continuous institutional practice of granting such extension, which could be enforced in absence of the law on the subject.

• The summaries of the Ministry of Defence approved by the president, the prime minister and the cabinet for the reappointment, extension and fresh appointment of Gen Bajwa seem to be meaningless and of no consequence, in absence of the law prescribing tenure of a general and providing extension for another tenure.

• Regulation 255 of the Army Regulations (Rules), in its original as well as amended form, does not confer authority on the Federal Government to grant extension of another full tenure to a general. This regulation provides for only a temporary arrangement for a short term, if the exigencies of service so require in the public interest.

• Section 176-A of the Pakistan Army Act and the regulations made under it appear to suffer from the excessive delegation of the essential legislative function, as neither that section nor any other section of the Pakistan Army Act provides the essential legislative policy guidelines for making the delegated legislation, viz the regulations, on the subjects mentioned therein.

• In view of the assurance of the attorney general given on behalf of the Federal Government to process the legislation for meeting the deficiencies in the Pakistan Army Act, in particular, the tenure, age of retirement and if deemed proper, the extension of tenure of a general, it is appropriate to leave the matter, at the first instance, to be decided by the chosen representatives of the people of Pakistan by making an appropriate legislation.

• In view of the legal vacuum regarding tenure and extension of a general and the assurance given by the attorney general to process legislation on the subject within six months, and also considering the importance of the responsibilities of the COAS regarding administration and organisation of the Army, it is appropriate that the incumbent COAS may continue for a period of six months, in order to preserve continuity of the institution.

The SC further clarified that in case the federal government remains unable to regulate the tenure and terms of service of a general and as a consequence of the army chief through an appropriate legislation by the parliament within a period of six months, “the tenure of the constitutional post of COAS could not be left totally unregulated and to continue forever” as “this would be inconceivable and amount to a constitutional absurdity.”

In case of such failure of the federal government, the verdict stated, the institutional practice of retirement of a general on completion of the tenure of three years “shall stand enforced” to regulate the tenure of Gen Bajwa and consequentially his tenure as COAS, from the date of his promotion to the rank of general and appointment as the army chief, i.e. November 29, 2016.

In that case, “the president shall, on advice of the prime minister, appoint a serving general officer as the new COAS”, the judgment added.

The apex court dismissed the impression that the various summaries prepared by the government in the same matter were drafted on its orders or directions.

“In fact, the court simply highlighted steps taken by the president, the prime minister and the cabinet, without any supporting law and as a consequence they on [their] own tried to rectify the same. The impression generated that the said steps were taken on the desire, orders or directions of the Court is dispelled.”