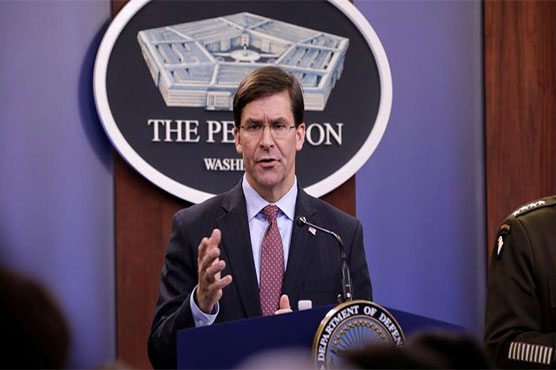 WASHINGTON (AFP) – Pentagon chief Mark Esper denied Monday that American forces would pull out of Iraq, after a US general s letter told the Iraqi government that troops were preparing to depart “in due deference to the sovereignty” of the country.

“There is no decision whatsoever to leave Iraq… There has been no decision made to leave Iraq. Period,” the US defense secretary said, one day after the Iraqi parliament voted in favor of ordering the US military out.

“That letter is inconsistent with where we are right now,” Esper added.

The official letter from US Brigadier General William Seely, the commanding general of Task Force Iraq, indicated clearly that US forces were readying for departure.

“In deference to the sovereignty of the Republic of Iraq, and as requested by the Iraqi Parliament and the Prime Minister, CJTF-OIR will be repositioning forces over the course of the coming days and weeks to prepare for onward movement,” he wrote, referring to the coalition force fighting Islamic State in Iraq and Syria.

“We respect your sovereign decision to order our departure,” said the letter, whose authenticity was confirmed to AFP by both Iraqi and US defense officials.

But Pentagon Joint Chiefs Chairman Mark Milley said the letter was only a “draft” that shouldn t have been sent.

He said it was “poorly worded” and was actually meant to indicate the US was shifting troops between bases, and not withdrawing.

“It was a mistake, an honest mistake, a draft unsigned letter, because we are moving forces around,” Milley told reporters.

“This was a mistake,” Milley said. “It shouldn t have been sent.”

On Sunday the Iraqi parliament — angered over a US drone strike two days earlier that killed a powerful Iranian general, Qasem Soleimani, while he was in Baghdad — voted to support the US exit.

In reaction President Donald Trump warned he would impose “very big sanctions” on Iraq if moved to expel US troops.

“If they do ask us to leave — if we don t do it in a very friendly basis — we will charge them sanctions like they ve never seen before,” Trump said.

Esper said Monday that many Iraqis, including lawmakers who did not take part in Sunday s vote, appreciate the US presence.

“I think the Iraqi people don t want us to leave. They know that the United States is there to help them become a sovereign, independent, prosperous country,” he said.

ECC recommends submission of amendments to Power Act 1997 to Cabinet