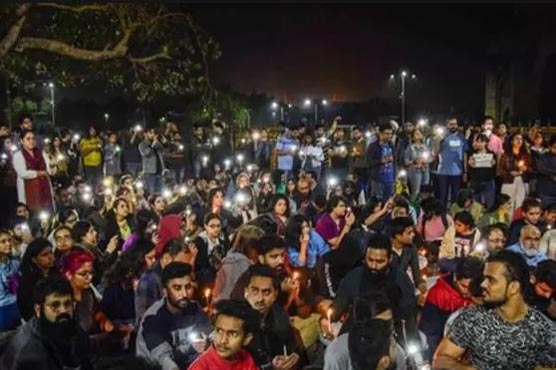 The widespread action was in opposition to what unions called the “anti-worker and anti-people policies” of right-wing Prime Minister Narendra Modi.

They highlighted the recent privatisation of public firms and natural resources and demanded a rise in the minimum wage and pensions.

Farmers and students joined some of the protests called by 10 trade unions who claim 250 million members between them.

Bus and train services and state-owned banks bore the brunt of the national strike action that was staged in defiance of government warnings of “consequences” for anyone who took part.

Protesters blocked roads and railway tracks, while those at rallies also chanted slogans against the government’s new nationality law that opponents say is anti-Muslim and has sparked widespread demonstrations.

In West Bengal state, strikers targeted railways and key highways and burned tyres on a main road in the state capital of Kolkata. Protesters carried red flags at rallies in the city.

Police said there had been some “clashes” in Kolkata and other districts between supporters and opponents of the strike.

The eastern states of Bihar and Odisha, Maharashtra in the west, Haryana in the north and Kerala and Karnataka in the south were also hit by the action.

Some workers at state oil and coal firms joined the strike.

The government had warned strikers that they would face “consequences” including having wages deducted and other disciplinary action if they joined the protest.

But the strike added to pressure on the Modi government already hit by widespread protests over the nationality law passed on December 11. More than 25 people have been killed in the protests. Growing unrest in universities has added to social tensions.

“The attitude of the government is that of contempt towards labour,” said the Centre of Indian Trade Unions, one of the groups organising Wednesday’s 24-hour strike.

Opposition parties have backed the strikers. Rahul Gandhi, former leader of the main opposition Congress party said the government had “created catastrophic unemployment” in a Twitter message praising the action.

A government’s move to privatise big state-run firms as it struggles to get out of a severe economic slowdown has riled the opposition and unions.

The government statistics office forecast on Tuesday that annual growth would slow to 5.0 percent in 2020, the slowest pace in 11 years.

It said declining consumption and investment, coupled with falling tax revenue, had combined to put the brakes on what was once the fastest growing of the world’s major economies.