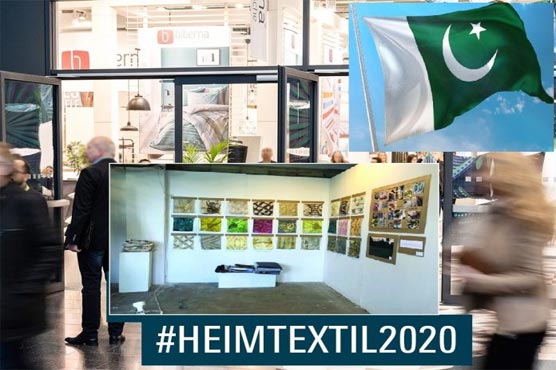 ISLAMABAD (APP) – With the presence of 231 exhibitors, Pakistan has become the 4th largest country to participate in the Heimtextil 2020 Trade Fair that started in Frankfurt (Germany) on Tuesday, January 7.

“Pakistan is the 4th largest country at the show after Germany, China and India,” said a press statement received here.

The 50th edition of Heimtextil, the international trade fair for home and contract textiles once again sparkled with the world’s largest product range for textile interiors and its unique presentation of the hottest trends, according to press statement.

This year, 3,041 exhibitors from 65 countries exhibited with increase in number of visitors each day. From Pakistan, 231 exhibitors are participating directly as well as through Trade Development Authority of Pakistan (TDAP).

Meanwhile, the participants have expressed satisfaction over the arrangement of the exhibition. Shaiq Jawed from J.K. Spinning Mills and Executive Committee All Pakistan Textile Mills Association (APTMA) said that the fair was going well as there were much more visitors this time, expressing the hope that they would get more orders from this edition.

Likewise, Waqas Ali from Best Exports and Executive Committee Pakistan Textile Exporters Association (PTEA) said that Heimtextil fair provided an opportunity to Pakistani businessmen to deal with new customers, engage with existing ones and share business details with them.

Moin A. Razzak from Hasham Towel and Executive Committee Towel Manufacturers’ Association of Pakistan (TMA) said that it was the key fair which definitely would help improve textile exports from Pakistan.

“It’s a big platform for those who have huge business as number of buyers from all around the world can be seen under one roof,” said Haroon Shamsi from Shaheen Industries and Executive Committee Towel Manufacturers’ Association of Pakistan (TMA)