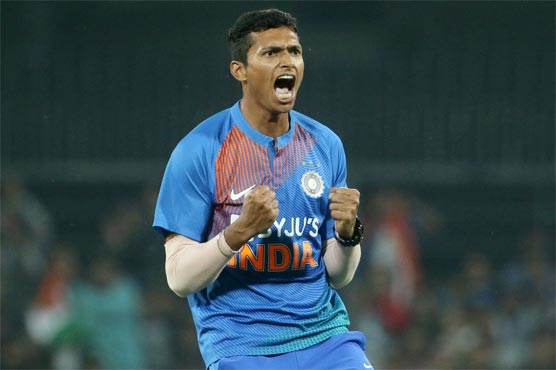 INDORE (AFP) – Fast bowler Navdeep Saini led a disciplined Indian bowling performance to set up a seven-wicket win over Sri Lanka in the second Twenty20 international in Indore on Tuesday.

Saini returned impressive figures of 2-18 while fellow paceman Shardul Thakur claimed three wickets to help restrict Sri Lanka to 142 for nine, a total the hosts surpassed in 17.3 overs to take a 1-0 lead in the three-match series. The opening match was rained off.

“This was a clinical performance, and that’s how we want to build on each series. We have ticked a few more boxes this time,” said skipper Virat Kohli.

“Brilliant from Navdeep. He has done well in ODI cricket, and he’s bowling well in T20s, with experienced guys like Jasprit (Bumrah), Bhuvi (Bhuvneshwar Kumar) and Shardul. It’s a really good sign for the team.”

The 27-year-old Saini, who made his one-day international debut against West Indies on December 22, was adjudged man of the match in his seventh T20 for India.

KL Rahul, who top-scored with 45, and Shikhar Dhawan, who made 32, on his return from injury, put on 71 runs for the opening wicket to lay the platform for India’s comfortable chase on a good batting pitch.

Leg-spinner Wanindu Hasaranga sent back the two openers as he bowled Rahul with a googly and then dismissed Dhawan lbw after a successful Sri Lanka review.

Shreyas Iyer, who scored 34 before falling to paceman Lahiru Kumara, and Kohli, who made an unbeaten 30 and hit the winning six, put on a key 51-run stand for the third wicket.

But it was the Indian bowlers who built the platform for victory after Kohli won the toss and elected to field first.

Sri Lanka kept losing wickets at regular intervals despite a brisk start but it was wrist spinner Kuldeep Yadav’s two strikes including Kusal Perera, for 28, that put a lid on the islanders’ scoring.

Saini, who bowled opener Danushka Gunathilaka for 20, claimed Bhanuka Rajapaksa caught behind for nine, as Sri Lanka slipped to 104 for five.

Pace spearhead Jasprit Bumrah also took a wicket on his return from a four-month injury lay-off by bowling Dasun Shanaka with a slower ball.

Thakur returned in his final over and the team’s 19th to rattle the lower-order with three strikes including two in successive deliveries.

Hasaranga signed off the innings with three successive fours off Bumrah but his effort was not enough.

“I thought we were lacking by about 25 runs. We were looking at 160 or so,” said Sri Lanka captain Lasith Malinga. “The bowlers did a good job of sticking to their job.”

The third and final match is on Friday in Pune.