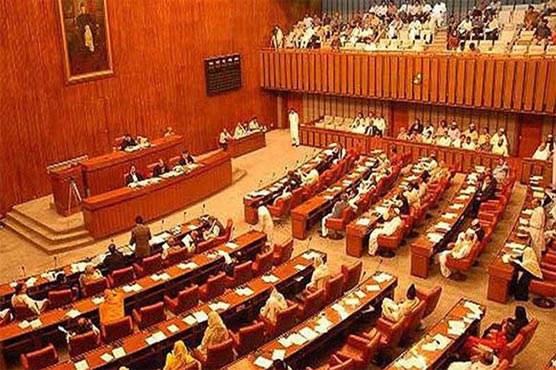 Chaired by Senator Farooq H. Naik, the meeting discussed in detail the proposed amendment drafts of the bills and approved them unanimously.

Taking part in discussion, Secretary Finance Kamran Baloch pointed out that amendments in the bill were vital to bring Pakistan out of grey list of Financial Action Task Force (FATF) as being on white list, the country’s economy would be strengthened further.

“Amendments are being brought only for the national cause and in the larger national interest,” he added.

The lawmakers were divided on the proposed amendment to change the offence of money laundering from a non-cognizable to a cognizable crime, however the meeting decided to approve the amendment with consent of five members while 4 members voted against it.

“I have serious doubts that by making this a cognizable crime, it would be misused,” Senator Ayesha Raza Farooq said, adding, “We can also retain this as a non-cognizable crime by improving our performance”.

Senator Ateeq Sheikh said legitimate businessmen should be differentiated with the terror financers or money launders.

Meanwhile, discussing the Foreign Exchange Regulations Amendment Bill, the committee strongly objected to the proposed amendment to put a limit on physical movement of foreign currency within the country and unanimously rejected the proposal.

Ayesha Farooq said there should not be any limit on inland movement of foreign currency as this law had the potential to be misused for political purposes.

The finance ministry officials were of the view that there was no limit on inland physical movement of local currency so why can’t these movements be in PKR instead of dollars.
“There is a nexus between Hundi operators with the local money exchangers and major outflow is done through this nexus,” he said.

The officials clarified that there was no limit of account to account transfer of foreign currency either within or outside the country.

He said the militants could easily transfer huge amount of foreign currency in cash that was why this amendment was necessary to be approved.

He said a person would be free to move or transfer $10,000 in cash and the inland movement exceeding the limit would require prior permission of State Bank of Pakistan (SBP).

The secretary finance maintained that this was very important for the country and if it was not approved, the government would have to face a big problem in its efforts against AML and financing of terrorism.

He said compliance of FATF would also be affected badly if this certain amendment was not approved.

He informed that this practice was being implemented in other countries such as USA, UK, France, Spain and others.

He said even there was a certain limit on physical movement of local currency along with the foreign currency.

The committee, however, could not be convinced and approved the amendment bill by rejecting the proposal of putting any limit of movement of foreign currency in cash within the country.