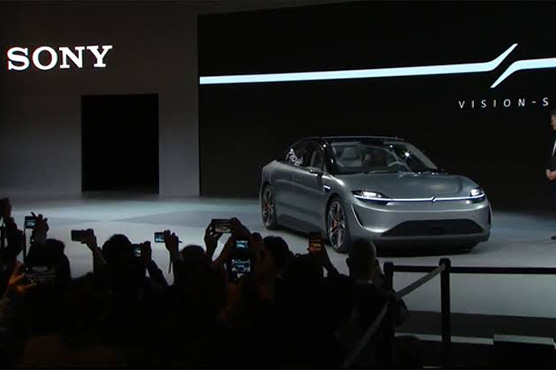 (Web Desk) – The tech giant, Sony, swept the floor of the CES gadget show 2020 by introducing an electric car called the Vision S.
Sony presented the prototype of Vision S design to show the sensors and in-house entertainment technologies of the future car.

According to BBC, the dashboard is flanked by an ultra-wide panoramic screen “for driving information and entertainment”.

However, the tech giant did not give any hint about the selling of the Vision S to the people.

“We will accelerate our efforts to contribute to the future of mobility,” said Sony s chief executive Kenichiro Yoshida as he revealed the surprise.

Bob O Donnell, from Technalysis Research, was at the press event.

“It was quite a shock to be honest with you,” he told the BBC. “It highlights how the company is reinventing itself.”

Among the internal features of the car is sensing technology that can detect occupants of the vehicle and recognise them, in order to allow for gesture control of the entertainment systems.

In total, Sony has included 33 sensors in the Vision S prototype. The Japanese firm is known to have developed powerful image sensors that can be used to analyse the road in front of a vehicle.

Mr O Donnell said that such technology could perhaps aid assisted-driving systems in future vehicles, helping judge when to apply the brakes or adjust the steering but still leaving most decisions up to the motorist.

“Assisted driving could be as useful, in fact, in some ways even more useful than autonomous driving,” he added.