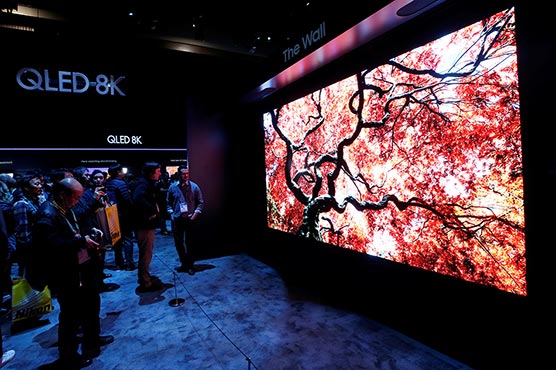 LG, Samsung, Sony and others touted the visual grandeur of new 8K super-high-definition screens, which are suited for TVs larger than 65 inches in diameter, a fast growing segment of the market.

The luxury sets are meant to appeal to millennials and Generation Z with features such as video streaming services, plus smart home and video games capabilities.

Samsung’s Sero TV, for example, pivots from landscape to portrait modes, the same way a smartphone or tablet lets a viewer flip a screen while watching a YouTube video, eliminating the black bands on the side.

“It has never been so clear that the role of the screen is changing right before our very eyes.”

The newer sets go beyond the current 4K or ultra-high definition displays — already an upgrade from the first generation of flat panels — to 8K, with more pixels for the massive screens now becoming popular.

Networks and content creators alike are beginning to come together to cater to viewers with such screens.

Samsung, for example, is working with YouTube and other partners to stream 8K content directly to its most expensive TVs, according to Joe Stinziano, Samsung Electronics America executive vice president.

He predicted 2020 would be a “tipping point” for 8K going mainstream.

Skyworth, a well-established TV maker in China, unveiled premium television models meant to break into the US and European markets.

“Only when the whole industry works together can it realize the full value of 8K to users,” said Skyworth TV chief executive Tony Wang.

“The entire 8K industry chain is reaching its full development and now is the best time to launch an 8K screen, when users can fully benefit from it.”

To stay in the race, televisions are also adapting to connected lifestyles by integrating voice assistants from Amazon, Google or Apple, and offering functionalities adapted to streaming platforms and video gaming.

“A unique growth engine for our business has been gaming monitors,” Stinziano of Samsung said.

Millennials see a television as a tool to help them win video games, according to TCL executives who showed off an enhanced line-up boasting features aimed at players.

That said, demand for flat panel displays fell short of expectations last year in the consumer market due in part to trade tensions between China and the United States as well as a slowing global economy, according to IHS Markit.

But it forecast “robust growth” of flat panel displays this year.

“Although there are still uncertainties due to the trade war between the US and China, demand for flat-panel displays is expected to increase on the back of historically low panel prices and the impacts of various sports events held during even-numbered years,” said IHS Markit Technology display research director Ricky Park.

Such events include Japan public broadcaster NHK’s plans to show the 2020 Olympics in Tokyo in 8K, which is expected to help boost that demand.