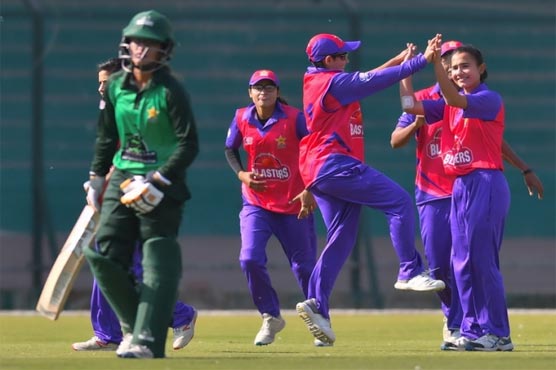 In the second match of the three-team tournament, PCB Blasters set a 155-run target for Bismah Maroof-led Challengers after Ramin Shamim chose to bat after winning the toss.

Javeria cracked a 40-ball 57, hitting eight fours and a six. Over the course of her innings, the right-handed batter crafted a 62-run stand for the second wicket with opener Ayesha Naseem, who scored 31 runs from 20 balls on the back of three sixes and a four.

Batting at number four, Aliya Riaz, who set-up a 25-run win for PCB Blasters against PCB Dynamites on Thursday, scored 29 off 27. The all-rounder hit four fours.

Challengers managed 142 for nine in 20 overs in their reply.

Muneeba Ali shone with a half-century. The left-handed batter scored 50 runs in 36 balls and smashed three fours and three sixes.

She, however, couldn’t get the desired support from the other end as the next top-scorer, Hafsa Khalid, made 24. Only four batters, including Muneeba and Hafsa, managed scores in double-digits.

Anam Amin, the slow left-arm, put a dent in the run-chase by removing Ayesha Zafar (13) earlier in the piece. She picked up three wickets for 14 runs.

For their contributions with bat and ball, Javeria and Anam were jointly-declared player of the match.