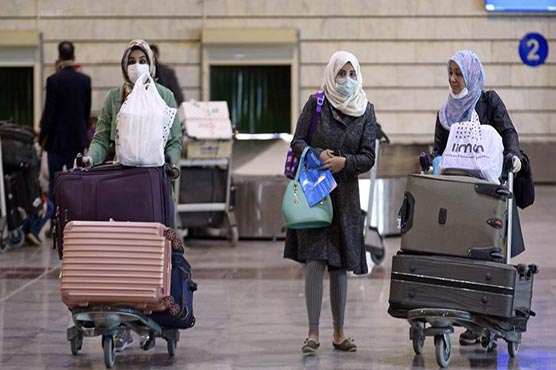 TEHRAN (AFP) – Iran on Thursday reported 15 new deaths from the novel coronavirus, raising the national toll to 107, and said it would keep schools and universities closed until early April.

But the number of the dead could be higher, according to a tally reported by state news agency IRNA.

Data gathered by the agency from medical universities across Iran as of Wednesday night show at least 126 have died, as it lists the toll in Tehran and Gilan — two of the worst-hit provinces — as “unknown”.

Iran has already suspended major cultural and sporting events and reduced working hours across the country, which is one of the worst hit after China.

“Schools and universities will be closed until the end” of the current Iranian year, health minister Saeed Namaki said in a televised press conference.

The Iranian year ends on March 19 and national holidays then last until early April.

“People should not consider this as an opportunity to go travelling,” the minister said. “They should stay home and take our warnings seriously.

“This virus is highly contagious. It is a serious matter, do not joke about it.”

“Until today, samples have been taken of 23,327 suspected cases, only 3,513 of which have been confirmed,” said ministry spokesman Kianoush Jahanpour.

According to Jahanpour, Tehran province is the worst-hit with 1,352 confirmed cases, followed by Qom with 386, Gilan with 333 and Esfahan with 238.

The Shiite holy city of Qom, south of Tehran, is the epicentre of Iran’s coronavirus outbreak and where its first deaths were reported on February 19.

Authorities have since scrambled to halt its rapid spread.

“But there is some good news, of the increasing rate of recovery,” Jahanpour said, noting that 739 of the confirmed cases had made recoveries.

The southern province of Bushehr reported its first three confirmed cases on Thursday, with COVID-19 now officially infecting all of Iran’s 31 provinces.

Namaki asked people not to travel as it is “very dangerous” and said reports show “many cars on the roads are taking the virus with them” to uninfected areas.

“If you do not treat the situation with special care we will be struggling with this disease for a long time,” he said.

The minister called on Iranians to stay home and said even the special coronavirus committee he chairs will hold its meetings remotely online.

Limitations on domestic movements will intensify with more checkpoints across the country.

“If we identify anyone at city entrances suspected of infection or infected with the virus we will certainly quarantine them for 14 days,” Namaki added.

Photos published by state news IRNA showed checkpoints at Tehran-Qom highway where drivers and passengers were checked for fever.

According to the minister, the government is considering incentives for nurses and paramedics who voluntarily transfer to centres and hospitals fighting the virus, and is also considering alternatives to cash in daily transactions