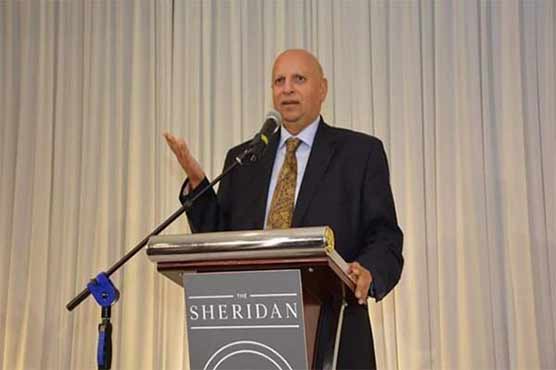 LONDON (APP) – The Governor of the Punjab province Chaudhry Muhammad Sarwar has said that Pakistan is an attractive liberal investment destination with tremendous opportunities to Overseas Pakistanis investors as well as foreigners in various sectors of the economy and in China Pakistan Economic Corridor (CPEC) flagship projects.

He said this while addressing as the chief guest at an investment Roadshow of Faisalabad Industrial Estate Development and Management Company (FIEDMC) held in collaboration with Pakistan High Commission London here at the premises of the High Commission on Wednesday evening.

The Roadshow was largely attended by British investors, British Pakistanis businessmen, senior staff of Pakistan High Commission, representatives of FIEDMC, members of UKPCCI and journalist community based in the UK.

Speaking on the occasion, Governor Punjab Chaudhry Muhammad Sarwar said that promotion of investments through creating the conducive business environment for investors, provision of basic amenities of life including health, education, job opportunities, peace and security and clean drinking water to the people were the top priorities of present Pakistan Tehreek-e-Insaf (PTI) government.

He said that under the dynamic leadership of Prime Minister Imran Khan, the government was committed to achieving these objectives to transform Pakistan into a socially and economically strong and viable welfare state in the comity of the nations.

He added that due to prudent economic policies of the government, a conducive liberal investment environment has been created to investors for investment in different sectors of the economy.

He, therefore, called upon the Overseas Pakistanis businessmen and foreign investors to take optimum benefits from these opportunities for their own benefit and for the socio-economic development of Pakistan.

He expressed the hope that FIEDMC London Roadshow would help attract foreign investments and strengthen links with multinational companies and institutional investors.

He said that under CPEC flagship projects Special Economic Zones (SEZs) have been created with huge incentives to facilitate the foreign investors wanted to establish their industries and other business projects in these zones. He added that Pakistan would encourage more British Pakistani and overseas investors in these SEZs including FIEDMC.

Chaudhry Sarwar said that a few years back security situation was a big challenge for Pakistan but due to the sacrifices of the security and armed forces of Pakistan peace has been restored completely and eliminated the menace of terrorism from the country.

He said that Pakistan despite its limited resources has now become a role model to other countries for successfully eliminating terrorism and terrorists from the country.

He said that due to improved security situation now international matches including Pakistan Super League (PSL) were being held in Pakistan and investors were also taking a keen interest in doing business in the country.

The Governor Punjab said that Overseas Pakistanis play an important role in the development of their country of origin (Pakistan) by remitting US $ 22 billion annually.

The Governor said that now such cases were resolved within three to six months, while in the past these were unresolved for years.

He asked the Overseas Pakistanis that doors of his governor house were open for them and assured the investors that they would be fully facilitated and taken care of.

The Governor Punjab said that minorities in Pakistan were fully protected and enjoying equal rights in the country.

He specially mentioned the opening of Kartarpur corridor for Sikh community from across the world on the 550th birth anniversary of Baba Gurunanak.

He informed the gathering that India tried its level best to sabotage the corridor project but Pakistan completed the scheme in a record ten months’ time.He said Sikh community in India and around the world were happy with the project.”They love the Pakistan government and its people for the opening of the project for them”, he remarked.

About Kashmir, he said that Pakistan wants peace with neighboring countries including India and wanted to resolve the dispute peacefully and through dialogue.

He condemned India for changing the status of India occupied Jammu and Kashmir (IOJK).

Chaudhry Sarwar called for implementation of United Nations Security Council (UNSC) resolutions on Kashmir to decide Kashmir people their future destiny and ensuring durable peace and prosperity in the region.He added the international community including the thirty-six (36) members of the European Parliament whom he met last November had expressed their concerns over the gross violation of human rights in Indian occupied Kashmir.

He lauded the struggle and sacrifices of people of Indian occupied Kashmir for achieving their birthright to self-determination.

He also paid tributes to the sacrifices of Muslims in India against the Indian Citizenship Bill.He added that even Indian own members of Parliament were opposing the Bill.

Due to his efforts a peace agreement has been reached among the United States, Afghan government and Taliban on Afghanistan.He said that Pakistan would be a the direct beneficiary of peace in Afghanistan.

Speaking on the occasion, Pakistan High Commissioner to UK, Mohammad Nafees Zakaria welcomed the Governor Punjab Chaudhry Muhammad Sarwar, FIEDMC team and other guests at the Roadshow.He said that Pakistan’s economy was on an upward trajectory.

He said that Pakistan enjoyed a unique geostrategic position with enormous economic and trade opportunities for investors including foreign investors.

He said that China in the year 2015 under the Belt and Road Initiative (BRI) had announced an investment of US $ 62 billion in China Pakistan Economic Corridor (CPEC) flagship projects.

He added that this initiative also offers enormous opportunities for foreign investors to invest in various projects in the country. Nafees Zakaria also urged the Pakistani diaspora and British investors to establish their businesses in SEZs like FIEDMC and Allama Iqbal industrial city.

Speaking on the occasion, Chairman of FIEDM Mian Kashif Ashfaq said that his organization was playing an important role for attracting investments for its first prioritized SEZ Allam Iqbal Industrial city under the CPEC with all required facilities of land, gas, and electricity to the investors.

He said that a one-window operation has been established in the zone to facilitate and guide the investors with tax incentives. “All seventeen (17) federal and provincial departments were working under the one widow to facilitate the investors in the Economic zone”, he remarked.

He added that investors from China , Turkey and other countries were investing in the zones.

He also highlighted the significance and benefits of investments in the SEZs.

Mian Kashif urged the Overseas Pakistanis investors including British to take benefit from the investment opportunities being offered to them in these zones.

He also asked the foreign investors to invest in SEZs for their own benefit and the prosperity of Pakistan.He appreciated the prudent economic and investment policies initiated by the

PTI government to attract investments in Pakistan with unprecedented incentives to investors. He thanked Pakistan High Commissioner for his support in organizing this event.

Destroyers of country’s economy have flown to London: Dr Firdous