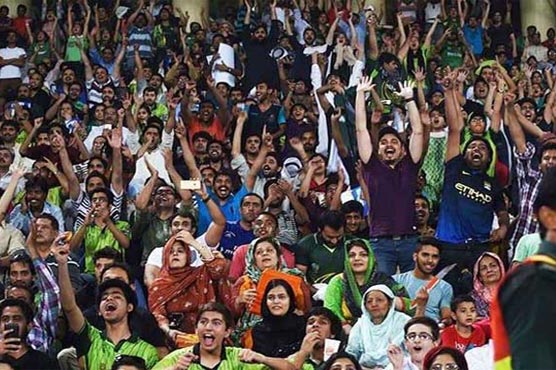 PSL 2020: PCB thanks Rawalpindi and Islamabad

LAHORE (City News) – The Pakistan Cricket Board (PCB) today hailed the contribution of Rawalpindi and Islamabad fans, local and provincial administrations and the security agencies in making HBL Pakistan Super League 2020 a resounding success in its homecoming edition, said an official press release by the PCB.

The PCB also paid tribute to the Pindi Cricket Stadium ground staff, terming them as part of the eighth team of the HBL Pakistan Super League 2020.

Over 100,000 spectators attended the HBL Pakistan Super League matches at the 17,000-capacity Pindi Cricket Stadium. This is after approximately 80,000 fans had watched live action at the Multan Cricket Stadium.

Crowd response in Lahore and Karachi has been equally overwhelming. In Lahore, to date, the average crowd attendances have remained at around 80 per cent, while the first four matches in Karachi have seen attendances breaking the 90 per cent barrier.

PCB Chief Operating Officer Salman Naseer said: “We owe a big thanks to the cricket fans and followers of the twin cities of Rawalpindi and Islamabad who turned up in big numbers to play their part in the success of the HBL Pakistan Super League 2020.

“We govern the game for the people of Pakistan, so, in this background we were delighted to see the fans have a great time, celebrate the regular resumption of cricket activities and support the Pakistan Cricket Board.

“The fans’ contribution has not only motivated and inspired the players to produce their best performances, but has also helped Pakistan to showcase its values, culture and passion through our world-class broadcast, positive media and proactive social media coverage.

“There have been games in which weather has not been cricket-friendly, but the fans have remained patient and loyal, which is another hallmark of this great nation.”

Salman Naseer had special praise for the ground staff. “After the six participating sides and the match officials, ground staff are the eighth team in the tournament. Pindi Cricket Stadium ground staff were the real heroes when they worked tirelessly to prepare the ground for matches despite persistent rains.

“We have equally hardworking and determined ground staff in Lahore and Karachi. When you have such a committed staff working for the PCB, the organisation can only flourish, which, in turn, benefits the game and the athletes.”

Thanking the local and provincial authorities, Salman Naseer said: “On behalf of the PCB, I also want to appreciate the support of the local administration, provincial governments and security agencies. Without their cooperation, the PCB would not have been able to put together a spectacle of this magnitude.

“The PCB is very fortunate to have strong relationships with all the government agencies and this is clearly reflected in the successful holding of the biggest cricket tournament in the history of Pakistan.”