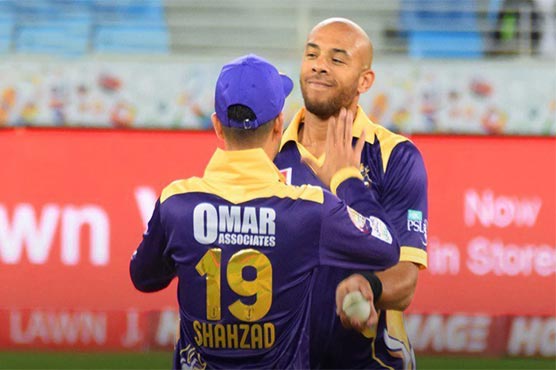 Talking to the media men before team’s practice session at the Gaddafi stadium he said, “The guys may not be as consistent as we would have liked them to be but if we win the tournament nobody would speak about these losses.”

About the young team, he said the team has recently experienced ups and downs as there are many young guys in the team, adding that if Quetta win the two remaining matches, they have good chances of qualifying for the play-offs.

To a question, he said T20 cricket is unpredictable around the world, adding that one team is at the bottom one year and goes on to win the tournament the next year.

About lack-luster team performance from the HBL PSL IV champions he said, “We lost Umar Akmal before the very first game in the HBL PSL V and he was a very important player for the Quetta Gladiators as he had produced consistent performance over the years.”

About the hospitality, the left-arm fast bowler said the food and hospitality have been great in all cities of Pakistan, adding that Ahmed Shahzad has been a great host to him and has shown him around.

Vis-à-vis crowds in the HBL PSL V matches, the Gladiators’ fast bowler said the crowds have been excellent at all venues he had played so far while atmosphere at all the stadiums was electrifying.

Quetta Gladiators are currently placed at the bottom of the points table in the HBL PSL V with six points from eight matches. They are due to play their next match against Multan Sultans at the Gaddafi stadium on March 11 (Wednesday).