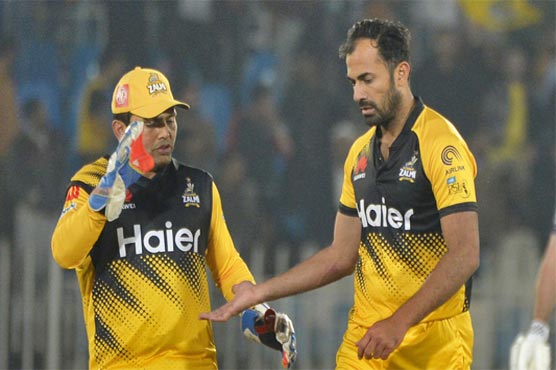 LAHORE (APP) – Peshawar Zalmi captain Wahab Riaz said that he had played most of his cricket in Lahore, and Gaddafi stadium was the home-ground but his heart belonged to Peshawar Zalmi.

“I have played for Peshawar Zalmi all these years and would go back with a win against Lahore Qalandars,” he said while responding to media men before team’s practice session at the Gaddafi stadium.

Peshawar Zalmi will play Lahore Qalandars at the Gaddafi stadium on March 10 at 07:00 PM.

Wahab Riaz said Haider Ali is very talented and fulfilling his role. “He is a natural striker of the ball and we want him to play his natural game on the field.”

On the inclusion of Umer Amin, Zalmi captain said the team selection would be made after having a look at the pitch and weather.

About Ben Dunk, he said, no doubt he is a good player who has won two matches single-handedly for Lahore Qalandars, adding that the Zalmis had a special plan against Ben Dun and the implementation was needed.

To a question, Wahab Riaz said the pool was wide open for all teams and any team could qualify for the playoffs, adding that both the remaining matches were important for Peshawar Zalmi and they would try to win both of them especially against Lahore Qalandars.