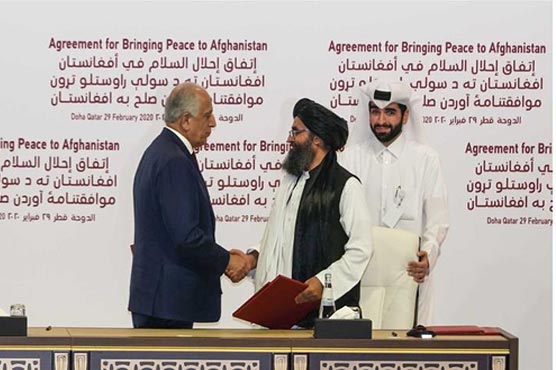 US calls for Tuesday UN vote on Taliban deal

UNITED NATIONS (AFP) – The United States has called for a Tuesday vote at the UN Security Council to endorse Washington’s deal with the Taliban that was meant to pave the way to peace in Afghanistan, diplomats said.

The US military has begun withdrawing troops as part of the pullout agreed in the February 29 agreement with the Taliban.

The request for a UN vote came after hard negotiations that began one week ago, diplomats said Monday.

The resolution comes amid a series of institutional crises in Afghanistan, following the double swearing-in Monday of President Ashraf Ghani and his rival and former chief executive Abdullah Abduallah, both of whom claimed victory in the recent presidential election.

According to the draft text seen by AFP, the Security Council “urges the Government of the Islamic Republic of Afghanistan to advance the peace process, including by participating in intra-Afghan negotiations through a diverse and inclusive negotiating team composed of Afghan political and civil society leaders, including women.”

The US’s request that the Security Council adjust its agreement with the Taliban is a rare move in the forum for an accord between a foreign country and an insurgent group, diplomats said.

Diplomats were also surprised that the agreement included two secret appendices on the fight against terrorism that Council members must approve without even knowing what they say. One diplomat described it as “unbelievable.”

Russia’s position on the resolution remains uncertain. Moscow had hinted on Friday that it might oppose the text after the US rejected a statement endorsing a ceasefire agreement in Syria between Russia and Turkey.

The US draft on Afghanistan “welcomes” the February 29 pullout deal and “calls upon all States to provide their full support to promoting the successful negotiation of a comprehensive and sustainable peace agreement which ends the war for the benefit of all Afghans.”

Washington’s plan also puts pressure on the Afghan government to engage in negotiations with the Taliban to achieve a “permanent and comprehensive ceasefire.”

Although the first version of the text, released last week, omitted any mention of women, the latest text mentions them several times.

The US resolution also states that the Security Council “expresses its readiness upon the commencement of the intra-Afghan negotiations to review the status” of UN sanctions imposed on individuals and groups in 2011 “in order to support the peace process.”