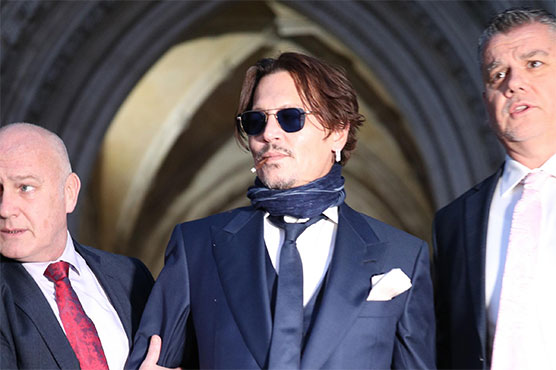 LONDON (AFP) – A libel case brought by Hollywood actor Johnny Depp against Britain s The Sun newspaper, over allegations he abused his ex-wife Amber Heard, was suspended Friday due to coronavirus.

Two weeks of hearings were due to start in London s High Court on Monday, but the judge heard that two of Depp s legal representatives have already had to self-isolate.

Judge Andrew Nicol said he had come to the “reluctant conclusion” to adjourn because coronavirus-related travel restrictions between Britain and France, where Depp is living, and the United States, where Heard lives, may complicate the hearings.

Depp is suing News Group Newspapers, which publishes The Sun tabloid, and its executive editor Dan Wootton over an April 2018 article that referred to the “Pirates of the Caribbean” star as a “wife-beater”.

Judge Nicol noted that England s Lord Chief Justice had announced earlier this week that criminal trials lasting longer than three days should be adjourned due to coronavirus.

“I recognise that I am not conducting a criminal trial, but the large number of lawyers involved, as well as the public and press who wish to attend, mean that the numbers involved would be no different,” he said.

The newspaper s lawyers said earlier this week they were keen to proceed, and the judge said he had received a statement from Heard expressing her “very strong wish” to continue.

She was willing to give evidence over videolink from Los Angeles, and if necessary, fly to Britain.

But Depp s lawyers said he would not be able to travel because of restrictions in France, nor would he be able to give evidence over video-link from his “remote location” in the country s south.

Depp and Heard married in February 2015 and settled a divorce out of court in 2017.

He denies being abusive towards his ex-wife and has brought separate libel proceedings against her in the United States.