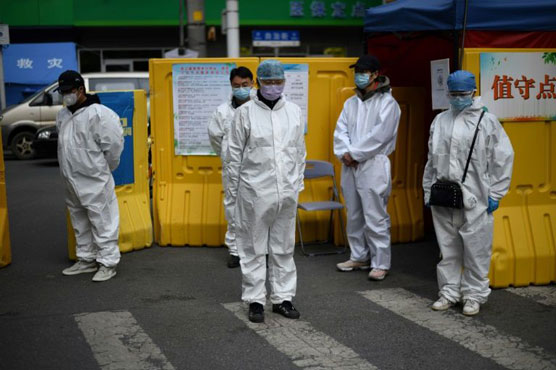 WUHAN (AFP) – China came to a standstill on Saturday to mourn patients and medical staff killed by the coronavirus, as the world’s most populous country observed a nationwide three-minute silence.

At 8 am PST (0200 GMT), citizens paused, cars, trains and ships sounded their horns, and air-raid sirens rang out in memory of the more than 3,000 lives claimed by the virus in China.

In Wuhan — the city where the virus first emerged late last year — sirens and horns sounded as people fell silent in the streets.

Staff at the Tongji Hospital stood outside with heads bowed toward the main building, some in the protective hazmat suits that have become a symbol of the crisis worldwide.

“I feel a lot of sorrow about our colleagues and patients who died,” Xu, a nurse at Tongji who worked on the frontlines treating coronavirus patients, told AFP, holding back tears.

“I hope they can rest well in heaven.”

Workers in protective wear paused silently beside barriers at one residential community — a reminder that there are still tight restrictions on everyday life across Wuhan.

Pedestrians in one of the city’s busiest shopping districts stopped walking and kept their heads low in a silent tribute ceremony, while police patrolling stood at the side of the road with their riot shields down and bowed heads.

“During this process, a lot of people including the medical workers… have made extraordinary contributions. They are all heroes,” shopper Wang Yongna told AFP.

“As ordinary citizens, we should remember this day.”

Park-goers paused their activities too, some holding badminton rackets by their sides, others with hands together in prayer.

Trains on Beijing’s subway network also came to a standstill, and AFP saw passengers including children stand silently throughout the three minutes in a mark of respect.