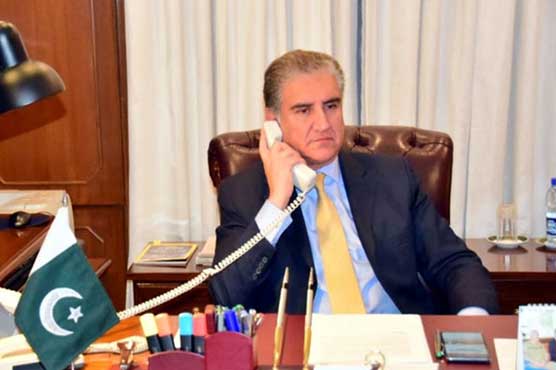 on Monday called for pooling of region-wide research capabilities to

combat Coronavirus for effective coordination in relief and containment

In a telephonic conversation with Secretary General of Shanghai

the wake of the pandemic, Pakistan had proposed a video conference of

SAARC Health Ministers to learn from each other’s experiences.

The foreign minister briefed the Secretary General on the measures

being taken by Pakistan to contain Covid-19 pandemic.

comprised more than 40 percent of the world population and accounted

for a quarter of global GDP.

At a time when the entire world was facing this challenge, coordinated

efforts through SCO platform were essential to adopt an effective

strategy to control the pandemic, he added.

Qureshi said China was providing valuable support to Pakistan in

dealing with the pandemic.

Underlining that China had led the way in effective containment, and a

lot could be gained from the Chinese experience, the Foreign Minister

on China’s effective response to the pandemic.

of the Experts of Health Ministries of SCO member states on April 1,

Alluding to the adverse socio-economic ramifications of the crisis,

had discussed this issue with other leaders including the Secretary

General of UN, the Secretary General of OIC and his counterparts from

the proposal forward through its own platform.

The SCO Secretary General thanked the Foreign Minister for the call.

He expressed appreciation for the Prime Minister’s proposal for debt

relief and restructuring for developing countries and said that financial

support for developing countries was the need of the hour.

The Secretary General conveyed his best wishes to the Government and

people of Pakistan in successfully facing the challenge posed by the

pandemic and reiterated his resolve to utilize all possible means to

as soon as the situation permitted, which he accepted.

President for measures to enhance Internet connectivity to facilitate students