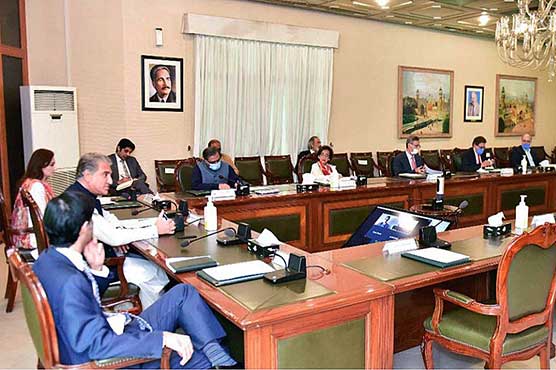 A meeting of the Advisory Council on Foreign Affairs was held with Foreign Minister Shah Mehmood Qureshi in chair.

The Council discussed the situation arising out of the Covid-19 pandemic, and responses and strategies required to successfully surmount the challenges.

Political, economic and social implications of the crisis, with particular reference to Pakistan’s foreign policy were also discussed.

The foreign minister apprised the Council about Prime Minister Imran Khan’s Global Initiative for Debt Relief, the various dimensions of Pakistan’s outreach to the international community in the context of the Covid-19 pandemic, and efforts underway for early repatriation of Pakistanis abroad.

The Council appreciated the Ministry of Foreign Affairs’ pro-active approach. The Advisory Council on Foreign Affairs meets regularly under the Chairmanship of the Foreign Minister and provides independent experts’ inputs on foreign policy formulation.

Earlier today, Talking to media persons after attending the second meeting of sNational Assembly s Special Committee on Virtual Session at the Parliament House, FM Qureshi said the government believed in the supremacy of parliament and valued the proposals received from parliamentary leaders on the mode of convening the session of National Assembly.

Qureshi emphasized on rising above the political affiliations to ensure the sanctity of the parliament.

Qureshi said world over, the parliamentary business continued even in the time of crisis.

He said all political parties gave positive input and presented a number of good suggestions on mechanics of holding the session, which were being forwarded to the Speaker National Assembly.

He expressed confidence that a consensus would be developed on the issue.

The foreign minister said proposal of proportional representation by Pakistan People Party s Chairman Bilawal Bhutto Zardari was quite significant while ensuring safety of the members of parliament.

Also, the proposal by Minister for Railways Sheikh Rashid Ahmed on closing all galleries except the press gallery during the session is another good idea, he added.

Qureshi said presence of the parliamentarians from Sindh and Balochistan in the session could be difficult, for which he stressed putting in place alternative arrangements.

Sanam Saeed, Mohib Mirza appeal to authorities to bring them back home